Abdi’s Docademia is Finding a Voice for Underrepresented Communities

Nassim Abdi, Co-Founder of Docademia, is using film to capture and highlight the untold stories that are changing the world. 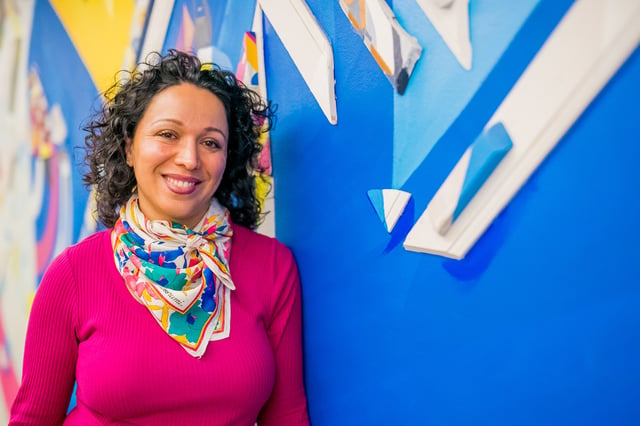 If you’re a Netflix subscriber, then you’ve probably seen Nassim Abdi before. That’s because she starred in the Secret Ballot, an Iranian film where she plays the role of an agent collecting votes. The film was shot in 2001 -- just two years before Abdi would emigrate to the United States so that she could earn a graduate’s degree in education. As an Iranian immigrant, Abdi faced prejudice from the fallout of the September 11 attacks.

“As an Iranian-American, I wanted to fight negative stereotypes of Middle Easterners that were in the media. I’m not a terrorist, I have an education; these were the perceptions that I wanted to break, and I realized that I could do that by connecting with and educating other people.”

And, as a former actress, Abdi asked herself, what better way to educate than to use the power of film?

That’s when she came up with the idea for Docademia, a startup that connects indie documentarians from around the world with faculty and students. Abdi’s objective is to use Docademia as a platform to increase awareness and drive engagement for social justice discussions in classrooms around the world. As an actress turned professor, Abdi’s initial concern was to find a medium that her students could connect with.

“I remember that I was trying to explain the concept of war to my students, and I had grown up in war so it was so painful to see that my students were not engaged. I started thinking about how I could change that, and that’s when a friend of mine had finished filming a powerful documentary called ‘Facing The Mirror.’ That’s when I realized the tremendous impact of social documentaries.”

Facing The Mirror tells the story of Dr. Kaveh Alizadeh, a plastic surgeon who launched a nonprofit to help individuals suffering from war-related injuries. Abdi was so inspired by the film that she showed it to her class and scheduled a live video chat with the filmmaker to highlight the human consequences of war. By the time the credits rolled, Abdi noticed that her students’ eyes were no longer looking at their cell phone screens  -- rather, they were glued to the film.

“It was very powerful, my students were completely engaged. I started seeing tears, I started receiving questions, and some of my students came up to me afterwards and asked me if they could get engaged with the nonprofit featured in the documentary. It was a transformative experience for them and for me as well.”

Since that showing, Abdi and her co-founders, Erfan Abdi and Leila Mouri, put together an extensive catalog of social justice documentaries that not only span national and global topics such as politics and war, but also cover more personal issues like culture, sexuality, and self-improvement. With its wide range of different academic topics, Docademia quickly expanded through universities in North America. And though Abdi is proud of how far Docademia’s come along, she says she’s just as excited to see where it goes.

“The more Docademia grows, the more I realize that it truly is a tech company. I have a lot of experience in education, but I don’t have a background in tech. I wanted to learn more about the tech side of things and increase my capabilities, so I searched for a community where I could receive a high quality of guidance.”

After scouting for a community, Abdi heard about WiSTEM, 1871’s accelerator program for women-founded businesses. With over 3,000 women in its network, WiSTEM appealed to Abdi because of the size of its community and its shared values of diversity and inclusion.

And as Docademia continues to grow, so will the many world-changing stories that will inspire the next generation of students.