In this profile of members of the WiSTEM C4 cohort, Zenah Khawaja of Semiautomatic Semiotics talks about her virtual reality platform meant to benefit brick-and-mortar businesses. 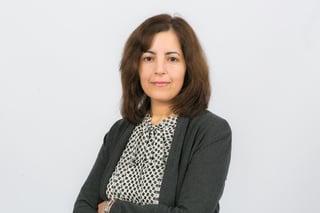 Q: Tell us a little bit about your personal history and background.

A: I grew up in various Chicago area suburbs. I went to University of Illinois at Chicago. In high school, I was interested in recording arts and initially intended to study electrical engineering there but early on found I was better suited to software and graduated with a computer science degree from the College of Engineering. After graduating, I worked full time as a software developer in the telecommunications industry. I later founded Semiautomatic Semiotics based on a provisional patent filing initiated by a “big picture” concept I had in regards to a virtual reality device.

Q: Tell us a little about your company. What’s your elevator pitch?

A: Theater style virtual reality (aka VR) technology has been previously associated with increases in consumer sales into the double digits and with extending dwell time. This approach also better meets various brand amplification needs including those of brick & mortar (B&M) retail and alternate Point of Purchase (PoP) such as events in multiple ways.

Q: How did you come to join the WiSTEM cohort?

A: I follow the 1871 Chicago profile on Twitter and saw the announcement for the Spring 2017 cohort application deadline and decided to apply. Unrelated, I was earlier able to attend the ChallengeHER event that took place at 1871 last September. I had since been learning about the government contracting process including small business set-asides and was focusing a greater percentage of time on pursuing such opportunities for the venture as opposed to accelerators or angel funding. Being selected for the interview was a happy surprise!

Q: What about the program do you think helped your business the most? Are there any specific examples?

A: The selection itself awarded us with 1871 membership that has given us access to mentor’s office hours to address specific needs. As well, the programming has covered a broad range of areas of interest to tech startups. Ms. Tech, which is an educational partner to the program, has provided a comprehensive curriculum that’s being used in giving all of the founders a mini 500 start-ups type experience. I really appreciate the direct contact with prominent Chicago area VCs and serial entrepreneurs, who themselves have very busy schedules that has taken place during the course of the program.

Q: What’s the greater good your company is trying to accomplish? How will it impact the community? What problem does it solve?

A: Immersion has inherent value in consumer facing applications. For digital signage, our vision is a theater style approach – one that is less likely to cause motion sickness. Interaction is key. This combination of immersion and interaction will help brick-and-mortar stores to raise revenue and reduce purchasing decision time. In order to innovate further, we’ll focus upon user locomotion. This highly horizontal technology has broad ranging applications including: experiential marketing, fitness, athletic training, physical rehabilitation and education.

Q: Give us a little insight into your perspective on diversity in the tech community. Why is it important? What do you hope to see?

A: As an entrepreneur, my perspective is that the number of women and non-Asian minorities working in early stage VC, especially non-corporate affiliated, is very few even in large metropolitan areas such as Chicago where we see a greater amount of diversity in the workforce of tech companies themselves. I have witnessed cases of women VCs hitting “glass ceilings” of one form or another. Therefore, I find the collaboration between InvestHer — a VC firm that focuses on women entrepreneurs — and WiSTEM very promising in terms of addressing the overall issue. On the workforce side, I believe it’s important for corporations to continue (as many large corporations have begun) to engage with professional associations, such as Society of Women Engineers (SWE), Anita Borg Institute (ABI) and corresponding organizations representing other underrepresented communities, when possible, in order to proactively address the issue. However, there definitely appears to be a disparity in terms of the level of diversity of the workforce going up to the executive level throughout corporate America — that’s increasingly higher in comparison to the early stage VC sector.

Fourteen businesses made up the fourth cohort of WiSTEM, which is 1871’s innovative and customized program designed to accelerate and cultivate opportunities for women in technology. The 14 women-owned companies began the 12-week program beginning in March and participated in a showcase event where they pitched to investors, business leaders and supporters.