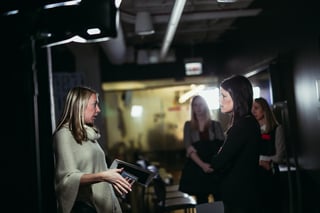 Jeanne Reidy, VP of Events and Content Development at 1871, chats with the brightest founders, executives, educators, and wave-makers in the technology, business, and entrepeneurial landscape. See below for the full list of interviews or watch the playlist on YouTube.

"Chelsea Collier's career is impressive to say the least. She has worked in economic development and social impact, at a tech startup and in government and, as she says, that all falls under the umbrella of Smart Cities. As one of ten fellows in the 2016 Zhi-Xing China Eisenhower Fellowship, she researchs Smart Cities in the U.S. and China, aligning public and private sector leaders with technology to address some the world's largest challenges at a local level." —Jeanne Reidy

"I first met Craig Kielburger years ago in Silicon Valley through my work with LeanIn.Org. I'd never met someone with as much infectious fire and determination to change the world. When I took over event production at 1871, Craig was one of the top entrepreneurs I wanted to feature on our stage. He and his brother Marc started WE Movement when they were 12 years old and the organization has gone on to build 650 schools for more than 55,000 young people all over the world. More than one million people have received access to clean water, healthcare and sanitation facilities and alternative income projects through the organization help more than 30,000 families". —Jeanne Reidy

"Purse Stings is doing some incredible work, educating women in financial literacy. Barb recently trained the World Bank's agents in Nigeria in order for them to share her curriculum with the local women in the region. This is one of the many examples of impact the women of WiSTEM are making around the world and I can't wait to see what comes next." —Jeanne Reidy

"Marching through the streets of Washington D.C. in January was one of the most memorable and empowering experiences of my life. It demonstrated the power of women coming together to lift each other up and demand that their voices be heard. I was particularly excited to get some time with Mrinalini who is the lead coordinator for the Women's March in Illinois. She had just delivered the keynote speech at the Worthy Women Summit which brought together women across races, ages and industries who want to continue the fight towards equality. Mrinalini has dedicated her life to activism and said doesn't think of it as a job -- it's her calling."  –Jeanne Reidy

"She calls it "the hardest job I ever loved". Jane Campbell is the first and only woman to serve as the Mayor of Cleveland, Ohio, in the city's 200+ years of history. She went on to serve as Louisiana Senator Mary Landrieu's Chief of Staff, helping rebuild the state after Hurricane Katrina. She's been an educator, a politician, and an entrepreneur herself. As the President of Women Impacting Public Policy, she works with their 79 partner organizations to serve as the voice for women entrepreneurs in the federal decision-making process. I loved this anecdote about her reaching out to then Mayor Daley for advice early in her tenure and him inviting her to Chicago to show her the ropes. This is such an example to our city's "Chicagoness" -- the innate quality and understanding of social responsibility to give back to the people and communities around us." —Jeanne Reidy

"Microsoft has been an incredible and ongoing partner for 1871 for which we are truly grateful. At the recent welcoming reception for WiSTEM's C5 Cohort, my first question for Martin was why he personally supports women in STEM. Without hesitation he responded 'my daughters.' One is going to be a scientist and the other - an entrepreneur." —Jeanne Reidy

"I caught up with Teri Arvesu of Univision after she spoke on a powerhouse panel of business leaders at the Chicago Latino Network's Latina Empowerment Breakfast. In a time when we're constantly flooded with media and real news is more important than ever, it is so crucial to have diverse voices at the tables where decisions are made. Teri was so candid about her thoughts on how diversity in the newsroom affects the stories that get told and the importance of an open and inclusive culture within any team but especially in media." —Jeanne Reidy

"Vunzai had just joined 1871 and the WiSTEM program when I had the chance to chat with her at the Worthy Women Summit. I was so captivated by her story and her passion for entrepreneurship and supporting women. Gorgeous Within isn't her first company -- though it is her first tech company -- so the perspective she brings to the WiSTEM cohort and the broader 1871 community is really unique. Plus, her energy is totally contagious." —Jeanne Reidy

"Gigi had such great energy first thing in the morning at the Chicago Latino Network's Latina Empowerment Breakfast. It was such a pleasure chatting with her. She discussed the kind of success that comes from the diversity of a company's workforce and the role that strong leaders have in making that happen. Gigi's future is very bright and I'm sure we'll see her back on this stage again." —Jeanne Reidy

"Prashanthi has spoken on 1871's stage a few times now and she steals the show each and every time. She is a thoughtful and consistent voice at the intersection of policy and tech and an advocate for women in leadership. This time she was a guest speaker at a gathering of women from Leadership Illinois as they discussed taking their leadership influence to the next level. It was enlightening to hear from her on what Lyft is working on these days and where they're going in the future." —Jeanne Reidy

Lindsay Avner | Founder and Chairman of the Board, Bright Pink

"[Lindsay] started Bright Pink more than 10 years ago after testing positive for the BRCA1 gene mutation at 22 years old, indicating she had an 87% chance of developing breast cancer and up to a 54% chance for ovarian cancer. She went on to be the youngest person in the country to have a risk reducing double mastectomy, dropping her risk for those diseases to 2-3%. She recently transitioned from the organization's CEO to Board Chair where she'll continue this important work. Learn more at brightpink.org or at their 9/27 event celebrating Innovation in Women's Health featuring fellow rockstar entrepreneur, Shradha Agarwal." —Jeanne Reidy