Tom Alexander: What I Learned From Howard Tullman

After serving Chicago's tech and business community for four years, Tom Alexander, COO of 1871, is moving on. In the second post of a two-part series, Alexander reflects on the some of the most important lessons that he's learned from working with Outgoing 1871 CEO, Howard A. Tullman. 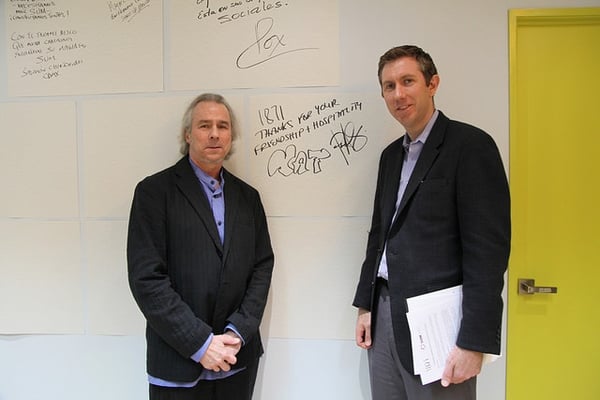 When the inimitable Jasmine Slivka left our team at 1871 in the summer of 2014 (Jasmine had been Howard Tullman’s executive assistant and was a wonderful member of our team and our community) she sent Howard a note that included her list of ten things she learned from working with Howard. I thought to myself, “good list, smart lady.”

For those who don’t know Howard, he’s been the CEO of 1871 for the past four years, and I’ve worked directly for him for all but one month of that time. He is a serial entrepreneur with a wealth of experience, and has over his career taken on a strong role as a teacher of business and entrepreneurship in every fashion (he has written over 250 columns for Inc. magazine and he has launched a course/curriculum at Dyett High School in Chicago, just to name two examples).

So as I take my leave of 1871, and as I come to the end of my four year tenure working for Howard, I thought it would make sense to share six lessons that I’ve learned from Howard over the past four years that I think are applicable to everyone in the community. Some of them come from his writings and columns, some of them are things he’s said, and some are reflections on watching him day in and day out for four years.

I’ve told this story a lot from various stages, but my first meeting with Howard about 1871 was at the Panera on Elston, on the day after Thanksgiving in 2013 (I left my son’s birthday party early to make it on time and Howard beat me there by a half hour). During that meeting, he said to me that “you don’t stay up until midnight working on someone else’s idea,” which stuck with me. In context, we were talking not about entrepreneurship and the passion associated with it, but about building an ecosystem, a community -- our team, the members and mentors and visitors to 1871, our corporate partners, and the broader Chicagoland community -- where everyone felt ownership and buy-in and had the confidence to pursue their own part of the idea. We’ve done this at 1871 -- if you walk around that place, it’s full of people who, regardless of their role or their place in life, have found their own idea that they are pursuing with every ounce of their body.

Accuracy is Everything -- and Leaders are Responsible More Than Anyone

Anyone who has worked with Howard for five minutes knows about his hatred of typos and inaccuracies. I have never witnessed anyone -- much less a CEO or a leader -- who is so focused on the details and the accuracy of everything. His position, which I have come to realize, is that it matters on every level -- what you say, what you write, whether or not you pick up that piece of trash on the floor, all of that is a reflection of you. And you are a reflection of your organization and its values and its hopes. Howard has asked the team at 1871 to try and model the behavior for the membership that we want them to model in their own businesses, and we’ve really been able to do that. And it requires the leaders of the organizations to be as committed, or more, than anyone else. This is an ongoing lesson of learning for everyone. Will we ever achieve total accuracy? Probably not. Can we wake up every day in the pursuit of it? Absolutely.

This came from an Inc. column that Howard wrote called “Fence it and forget it,” which was an end-of-the-year / beginning-of-the-new-year sort of piece (https://www.builtinchicago.org/blog/fence-it-and-forget-it). The piece deals with moving forward and dealing with things that may or may not have worked out exactly as planned. While the majority of the article deals with the finances of a company, which not all of us are necessarily involved with, there are valuable lessons in here for how we marshal our time, energy, emotions and attitudes. This has been and will continue to be an extremely important lesson for me. You’ve got only a certain amount of energy and a certain number of hours in a day -- how much of it are you spending trying to fix something that already happened? This is a lesson that can apply to every aspect of your business, and every aspect of your life.

Pics or It Didn’t Happen

At 1871, we take pictures of everything. EVERYTHING. I loved pictures even before I came to 1871 but working with Howard has given me a new appreciation for their role in modern business and society. Pictures are more important than they’ve ever been. It seems counterintuitive, but it’s true. They are an amazing tool for not just documenting and chronicling what has happened, what is happening, and what will happen, but they are also useful in understanding what is going on. Watching Howard’s approach to taking photos and using them to explore and understand our business has had a profound impact on me and the whole team at 1871, and really the whole environment. To wit: we launched a photo wall last year and we have updated it four times. That photo wall contains over 400 pictures of people in our community. This is not an exercise in vanity -- this is an exercise in inclusion. These photos, and the rest of our approach to visual imagery at 1871, come directly from Howard’s viewpoints on this topic and has had a huge effect on everyone who walks through our doors. We don’t have to tell people that 1871 is about, for, and by the community, and always has been and always will be -- they see it.

Many of you all have probably gone up the stairway at 1871 and visited our 13th floor facility, which houses hundreds of people. Dozens of businesses and thousands of businesspeople have come through the 13th floor since we opened it in February of 2016. What you probably don’t know is that this deal was dead in the water at one point -- literally the space had been given to a different tenant and it was over -- except for Howard, who basically made every phone call and had every conversation and called in every favor until the deal was back on. I can think of at least a dozen things -- big things -- over the past four years that would not have happened but for one person who refused to stop swimming. Good things happen when you don’t give up.

You Never Know Who is Going to Bring You Your Future

Finally, Howard says all the time, “you never know who is going to be your future,” and encourages everyone to consider the possibility that at all times, something may come across the transom that will change your business or your life. The culture here is one of openness to possibility and saying yes -- looking at everything as a chance for a game changer or a break or a new direction. It’s a big part of Howard’s relentlessness around work and his willingness to answer every email, take every phone call, speak at every event, etc. -- because at the end of the day we just really don’t know. A new contact, a new opportunity, a new technology or idea -- all of these things are floating around us at all times. It’s up to us to grab them.

One of the great things about work, especially modern work, is that we all get to take with us everything that we learn. It’s a true opportunity -- as we do good in our jobs and good for our communities and good for others, we can gain a lot of insight, knowledge and wisdom ourselves. It’s been an amazing four years here at 1871, and these lessons are a few of the ones that I’ll take with me, that have benefitted Howard and our team and our community already, and that I think will benefit all of you in the future.