Steven Galanis’ Cameo Will Get You Starstruck Anywhere, Anytime

If you’re stalking your favorite celebrity hoping for a chance to meet them, then you’re doing it wrong. First, it’s really creepy and second -- it’s a crowded market, so good luck standing out amongst the competition. Fortunately, Steven Galanis can help. His company, Cameo, let’s you skip the lines and hear from celebrities from anywhere in the world with personalized video shoutouts. 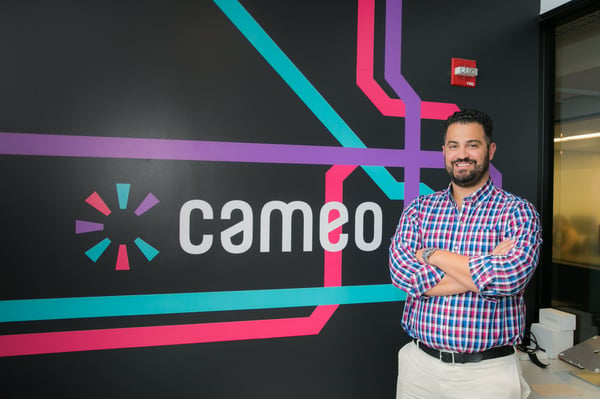 Gift-giving; how could a concept with such good intentions create so much dread? Every birthday or holiday, we scramble to find the perfect gifts for our friends and loved ones, hoping dearly that the fruits of our labor elicit something more than the all too familiar ‘it’s-the-idea-that-counts’ reaction. If you’re still trying to think of the perfect gift, then you might want to turn your attention to Steven Galanis’ Cameo, an online service that lets users purchase and send personalized celebrity messages to their friends and family.

“We built Cameo because we had this idea that selfies are the new autograph. Now, we know that you can’t really get an autograph or a selfie unless you’re physically present, so we wanted to create something where talent could provide those kinds of offerings from anywhere in the world.”

The process is simple. Users head to Cameo’s site, select their celebrity of choice, and enter the name, contact information, and select details about the recipient. Once they’ve made that purchase, the celebrity reaches out to the recipient with a video message or ‘shoutout.’ Galanis says that the platform, which has a talent pool comprised of over 2,000 athletes, actors, musicians, and more, provides a unique gifting experience for senders and recipients alike.

“What we hear from our customers is that our shoutouts are a unique and authentic gift because it shows the recipients how much they really know them. From the outside, it’s a special occasion because the receiver gets a personal message from their favorite stars, but dig deeper, and it’s an opportunity to build greater bonds between friends or relatives. ”

And it’s not just Cameo’s users who enjoy the service. The talent, which includes well-known names like Lance Bass, Perez Hilton, and The Wolf of Wall Street himself, Jordan Belfort --  also benefit from Galanis’ platform.

“When we tested the product, we found that a lot of people were willing to pay for a shoutout, but we also started pretty small and only had a handful of celebrities in our roster. We wanted to see how we could attract and retain more people, but we quickly found that our talent loved sending shoutouts and that they were telling their friends about it.”

It’s easy to see why Cameo’s talented stars enjoy the service as much as its customers -- after all, it feels good to make someone’s day. Reaction videos on the company’s website show starstruck recipients crying, laughing, and screaming in joy as their favorite celebrities wish them a happy birthday or best of luck on a new endeavor. It’s these interactions that Galanis is most proud of -- although he admits that getting to where he is now was anything but easy.

Galanis speaks from experience. When he arrived at 1871 last year, he took every workshop and met with every mentor to expand his business and grow its capabilities. After successfully applying lessons learned and scaling Cameo, he says that 1871’s Advanced Member Program, or AMP for short -- a six-month curriculum geared towards later-stage, mature companies -- was the natural next step.

“As a growing company, it’s imperative to share and learn new information and AMP’s community and curriculum is a perfect avenue for that. When you come here, you’re basically sitting in a room with entrepreneurs who are already vetted and proven. You can really learn a lot when you share strategies, ideas, and experiences with seasoned peers.”

For Galanis, the AMP program is also proof positive of how far his vision has come; in fact, it wasn’t too long ago when Cameo was just an idea. As an account executive at LinkedIn, Galanis constantly wrestled with the idea of heading out on his own to build a business. But like many great endeavors, Galanis’ entrepreneurial journey started on a New Year’s Eve.

“I was in Nicaragua for the holiday, but for whatever reason, I couldn’t stop thinking about Cameo. I remember a good friend of mine asked ‘if somebody else takes your idea for Cameo and becomes a billionaire with it, could you still live with yourself?’ The answer was obviously no. If you can’t stop thinking about something, then you need to do it. It’s that simple.”

And if you or those close to you can’t stop thinking about what your favorite celebrities are up to, it might be time to ask them for a Cameo.

Learn more about the 1871 Advanced Member Program and the other other AMP companies of Cohort 1.