“Where do I even start? How do I research charities? Who’s actually doing great work? Once I do give, where’s the money really going? If I’m not rich, can I even make an impact?" These are a just a few of the questions that pop when young professionals think about giving. To answer these, Joel Pollick, Founder and CEO of Percent Pledge, has made it his mission to empower every young professional to become a philanthropist and easily make giving a habit. In this post, Pollick discusses the importance of simplicity, transparency, and even fear. 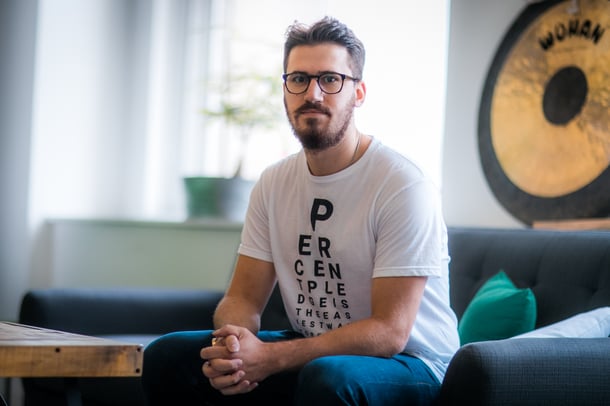 Ordering food on Seamless, binging content on Netflix, and calling a ride on Lyft -- these are three super easy activities that young professionals do often. Philanthropy, however, is not one of them. Giving back is scientifically proven to boost happiness, but despite this it’s not always easy to do and many of us give infrequently; when a friend’s running a marathon or when the person with a clipboard tracks you down outside Whole Foods. Joel Pollick, Founder and CEO of Percent Pledge, a platform that helps companies engage with and retain millennial talent through personalized giving, knows these common giving-related challenges all too well.


In fact, Pollick says that one of the biggest barriers for potential donors is that burden of research and not knowing where to start -- a problem that’s exacerbated by the fact that there’s over 1 million charities in the US alone.

“For your average American, it can be really hard to figure out which charity to commit to and it’s also hard to see how that charity is using your donations. Most people want to know that their donations are going to the right place and doing good. That’s why transparency is really important. When you donate, you want to know that your donations are really helping the people who need it.”

It’s part of the reason why Pollick built Percent Pledge -- which makes giving easier and more transparent for donors. Through the Percent Pledge platform, users can ‘pledge’ a small percent of their monthly income or budget to vetted Cause Portfolios of top-rated charities. Each Cause Portfolio – like Veterans or Youth & Education – is comprised of vetted charities supporting an issue area in a unique, innovative way. It’s done by design; Pollick says the Cause Portfolios erase that burden of research, simplify the giving process, and maximize impact.

“When you ask young professionals where they like to donate, they will usually tell you that they’re giving to a specific cause rather than a charity. They tend to identify with social causes like Animals or Women’s Empowerment. So, we built our Cause Portfolios to align with how millennials think about giving back and make it easier for them to support the cause(s) they’re most passionate about.”

And if anyone can come up with a better way for users to give to charity, it’s Pollick. Growing up, his family gave 10 percent to charity each year and that notion of habitual giving stuck with him. He found himself working as a consultant in Chicago and started looking for a way to habitually give like his family always did. And when we couldn’t find an easy way, he saw an opportunity to build something that solved a problem and made the world a better place. Using modern technology, Pollick started working on a platform that could carry out his objective.

“When Percent Pledge first started, it was built for consumers. We wanted to see if people would find value in what we built after all the work and research we did. But we never intended to keep a B2C model because we’d be hoping to go viral, which is a prayer, not a plan. To evolve the platform, we did 40+ deep-dive interviews with companies of all sizes, asking them about how they approached giving. Were they looking at giving as a core benefit? Was social impact a key element in their recruitment, retention, and engagement strategy?”

Pollick quickly found that the answer to all of these questions was a resounding ‘yes.’ It wasn’t long before Percent Pledge evolved and adopted a B2B2C model. Now, the organization has a number of local clients including the prominent parking reservation service SpotHero, yours truly 1871, and fast-growing recruiting technology company Yello.

“We realized that Percent Pledge provided a lot of value-add for growing companies between 50 - 500 people. We found that we could help these growing companies engage with their employees and offer them a unique business opportunity where doing the right thing for their community -- both morally and socially -- also meant doing the right thing for their business.”

To help companies and their employees track engagement along with their donations, Percent Pledge sends recurring impact reports. These Pledge Reports have been a key differentiator for Percent Pledge, delivering both individual employee donors and the companies as a whole transparency into their growing impact. With its opportunities for transparency and employee engagement, the platform has quickly picked up steam. In fact, Pollick is, quite literally, expanding his footprint.

“I’ve been traveling a lot to New York lately because we’re starting to build communities in New York and Boston as well. There’s a lot of companies out here that want an easy way to improve their employee experience and brand identity through social impact.”

It’s quick growth for a startup that only launched in December of 2017. While no founder would deny that luck is a factor to success, Pollick’s relied on lessons he often learned the hard way.

“There’s an ongoing ‘fear factor’ or fear of failure that you deal with as a founder. It causes a lot of stress and anxiety, but you have to turn it into fuel. A lot of people try to tell you to suppress that fear. I tried that and it really just doesn’t work. It’s really difficult, if not impossible, to do that. As an entrepreneur, I found that the fear never goes away, but you can turn it into something that drives you rather than something that holds you back.”

And one fear that continues to haunt many founders lies in a simple question -- ‘how am I doing?’

“You never want to measure your progress by what other founders are doing. In reality, no one has any idea what they’re doing. You create a lot of stress for yourself when you start to ask ‘why are other companies moving so much faster?’ If you look under the hood of most startups and companies, you’ll notice that they’re running around with limited direction and trying to figure things out just like yourself.”