Hunting, off-roading, camping -- these are just three of the many outdoor activities that you can’t do in a big city. What’s more, outdoor enthusiasts must enter long-term leases with exorbitant prices even if they’re just taking a weekend trip. Thankfully, Erik Johnson, Co-founder and President of PrivateAcre, is making it easier than ever for all of us to spend quality time in the great outdoors. 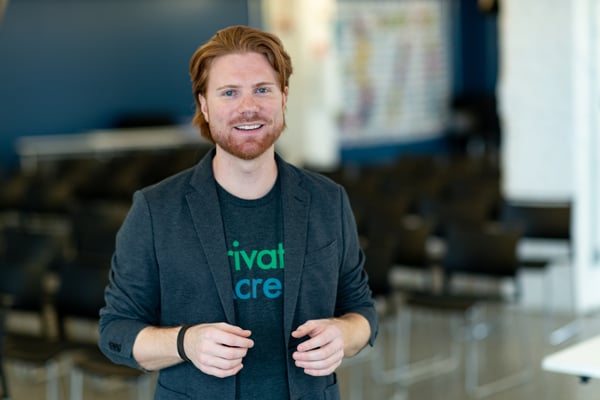 Growing up, Erik Johnson didn’t spend much time inside. While most folks were cozying up to a television set during the winter or cooling down in their air-conditioned rooms during the heat of summer, Johnson yearned for fresh-air and open spaces.

“I’ve always loved going outside and camping, snowboarding, and riding ATVs. These are my hobbies and passions, and I realized that unless you know someone who has that kind of property, it’s really hard to go out and do those things. Sure, there’s public property, but nine out of ten times, its going to be overcrowded.”

Johnson’s frustrations are shared by many, but one demographic is affected more than most others -- outdoor enthusiasts who now reside in major metropolitan areas.

“There are a lot of people that are just like me, who grew up playing in the outdoors and then moved to a major urban area. There are also plenty of people who may not have grown up in an outdoor environment, but want to learn how to go off-roading or how to shoot. The problem is, they just can’t find the land to do it on.”

That’s when Johnson began to look into land-leasing solutions. After all, if he could rent land, he could take a few days off to spend time in the sun. However, that’s when Johnson ran into another problem; the land-leasing industry only offered long-term options and he had difficulty finding a lease that ran less than one year.

“My friends and I wanted to go hunting and fishing, but we didn’t want to be in a long-term commitment. That was an eye-opener, because it was obvious to us that most people didn’t have the resources or the time for something that drawn-out. Basically, long-term leases were still inaccessible to the general population.”

So Johnson partnered up with colleagues of his who were asking the same questions -- what if outdoor enthusiasts could could book shorter land-leases? What if a hunter could book a plot of land for just a week or a weekend? What if a snowmobiler could do the same for just the winter season?

“We knew that there had to be a better way and we thought, ‘what if there was an online platform where you could book a short-term lease?’ Our team started doing research and talking to a lot of different demographics and found that many millennials, especially those who lived in urban and suburban areas, were pretty keen about that idea. They wanted to go fishing or drive an ATV on the weekend, and all they needed was a place where they could do that.”

As an entrepreneur who had already launched a startup, Johnson took a DIY approach to solving the problem -- he began working with a diverse team to develop a platform where outdoor enthusiasts could rent private land by the day and quickly turned that into his company, PrivateAcre.

“PrivateAcre is an online marketplace where enthusiasts can rent private land by the day for outdoor activities and experiences. The landowners of these properties still retain full control of their land and earn additional income off of their property from the service, so it’s a win-win proposition for both parties.”

Similar to Uber, which disrupted the taxi industry, PrivateAcre is rapidly disrupting the long-term lease industry. Johnson says that there have been numerous examples of his company making a big impact on a traditional market.

“Recently, we uncovered a property in Ohio that’s sat idle and inaccessible to most locals for about five to ten years. There are large ponds, a river, and huge animals that are home to this property. We saw a lot of people come out of the woodwork who were really excited about this and they started making offers. They wanted to run their long-term leasing model through our platform so we had to say ‘no,’ but it showed us how much we were shaking up the industry. We knew we were doing something right.”

And though Johnson is certainly on the right track, he says that he’s had to learn a number of key lessons to get there. For Johnson, chief among them is the ability to focus on his own successes rather than the achievements of others.

“One lesson I learned early on is that you’re going to come across a number of competitors and you can’t let that affect you. It’s a problem that a lot of entrepreneurs deal with -- there are times when a competitor will do something amazing and you’ll want to throw your hands up and just call it quits, but you have to realize that their wins don’t necessarily translate into your losses. You need to stay positive and determined.”

Part of that determination means setting aside time to get to know your customer base. For Johnson, that meant going outside of this comfort zone and meeting with people from a variety of different backgrounds.

“A lot of our clients are gun owners. I never grew up around guns, and I didn’t really know much about gun culture. In fact, I never saw myself going to gun shows when I started PrivateAcre, but I recently went to connect with some potential customers and I thoroughly enjoyed it. I think every entrepreneur will have to step out of their comfort zone at some point and frankly, that can be an incredible and rewarding experience.”

And though Johnson is often on the road meeting customers, he points out that he makes a pit stop every now and then to enjoy some of his favorite hobbies.

“I’m on the road sometimes, but I’m always looking for a good spot to camp or go off-roading. There’s a lot that modern technology can offer but sometimes, the best place you can be is the great outdoors.”