We've recently committed to growing entrepreneurship throughout the city while fostering diversity by leveraging our purchasing power -- specifically through the money we spend on food. As part of this initiative, we're sitting down with local entrepreneurs we've worked with to find out more about their businesses and their journeys as small business owners. Here's our interview with Nikkita Randle, Owner of Twisted Eggroll. 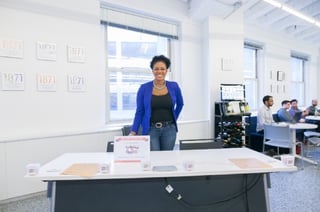 MW: How did you get your initial concept for the business?

NR: Initially my boyfriend just asked me to cook cheese steak and cheesecake egg rolls. We enjoy the egg rolls at Del Frisco's and I thought I could make my own version. Months later it dawned on me: I can stuff anything in an egg roll. Why be limited to the idea of the typical Chinese egg rolls? So these would be egg rolls with a twist, so the birth of Twisted Eggroll began in January 2015.

MW: What was your mission at the onset?

NR: From the original vision I had my mission consisted of: entrepreneurship, cooking, and leaving an incredible legacy. The constant push for those things came from the loss of my father. He was a strong believer in being in business for yourself, I finally found a way to turn one of my passions into a business.

MW: What makes Chicago a great place to build a business?

NR: Chicago is such a diverse city for opportunity. For example, after winning the Red Eye's Big Idea Award it opened up so many doors that are gems in Chicago. The most comforting thing in starting a business in Chicago are the resources. You have co-working spaces, the Chamber of Commerce, networking opportunities, and a multitude of conferences. There is just such a huge support system awaiting any entrepreneur in Chicago.

MW: How is running a business different than what you thought it would be?

NR: I think most people know that it will be hard work, restless nights, and a lot of money. But actually experiencing it is a totally different thing. Honestly, the biggest difference I notice is how much professional help I need. Even with having my MBA there are so many things with taxes, employees, pricing, etc. that were foreign to me and trying to learn it all really can become overwhelming.

MW: What's one thing on your menu we have to try?

MW: If you had once piece of advice for an entrepreneur just starting out, what would it be?

NR: Be open to absorbing as much advice as you can. So many people have already failed or succeeded and can help you along the way. You can avoid a lot of stress by just asking for or accepting advice from fellow entrepreneurs and sometimes as simple as friends or family.

Check out the menu at twistedeggroll.net.