Joseph and Matthew Moheban Want to Answer Your Childhood Question: 'What do I Want to be When I Grow Up?'

“It’ll never happen.” “It’s not possible.” “Follow the rules.” “Draw inside the lines.” “Be realistic.” We’re willing to bet that you’ve heard at least one of these phrases -- or some variation -- when you were a child. It’s not necessarily a bad thing; after all, why would anybody spend time chasing an unrealistic dream in hopes of becoming a rock star, an astronaut, or a professional athlete? However, brothers Joseph and Matthew Moheban, Co-founders of 220, a leadership and workforce curriculum for youth, are taking a very different view by asking, ‘why not?’ 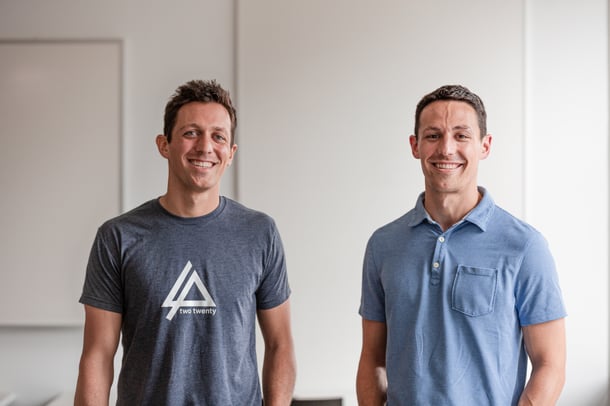 Joseph and Matthew Moheban were in high school when they started thinking outside of the traditional career path. Encouraged by their father, the possibilities seemed endless -- and both quickly decided that they wanted to start their own business. They knew that it’d be a trying task, but what they didn’t count on was how much disapproval they would receive.

“We always wanted to start a business because of what our parents instilled in us, but our desire to launch a business was always suppressed. Outside of our parents, everyone else was telling us that we had to follow the same structure as everyone else -- graduate college, get a good job, and work on our own business eventually as a side hobby.” – Matthew Moheban, Co-founder and Director of Development at 220

So Matthew and Joseph turned around from the road less traveled and got back on the same path as their peers. It wasn’t long before they found themselves in the banking and consulting industries -- and unfulfilled in their professional roles.

“We realized that we were just doing what everyone around us was doing because it made sense. You finish your internship, you receive an offer letter for a job, and you take it. That’s what’s comfortable, but after a number of negative experiences in the corporate world, we had a wakeup call and realized that starting a business to help people like our younger selves was what we really wanted to do.” – Joseph Moheban, Co-founder and Director of Partnerships at 220

Soon after leaving their jobs, Joseph and Matthew Moheban began working on a company that could help youth find their true calling. The brothers knew that the sky was the limit for youth given their own experiences and built their business around that concept.

“We start with what a student’s ultimate job is going to be, and we provide them with a framework for what they need to do on a weekly and yearly basis, which helps them develop a great foundation for career development.” – Joseph Moheban, Co-founder and Director of Partnerships at 220

After partnering with a number of organizations that serve youth from the ages of 14 all the way to 24-years-old, Joseph and Matthew began building a curriculum that focused on leadership, workforce development, and social entrepreneurship. They knew that traditional education systems might unfairly label poor-performing students as lazy -- when that might not be the case at all.

“We start from the lens and assumption that no student is permanently lazy. A lot of times, that motivation is hidden because students are coming from low income areas where they don’t have the resources to thrive or they’re not really sure what they want to do. What you’re really trying to do then is to look for what makes them passionate and what their values are to unlock that motivation.” – Matthew Moheban, Co-founder and Director of Development at 220

And if you ask youth what makes them passionate, it’s likely that you’ll hear answers ranging from ‘basketball player,’ ‘singer,’ and, to take a cue from Matthew and Joseph, ‘entrepreneur.’ While the odds might not be ideal for an aspiring professional basketball player, Joseph believes that the dream of achieving something greater is key to unlocking one’s potential.

“I think the biggest thing that we do to help students discover what they’re passionate about is to never discourage them. Instead, we encourage them to think bigger. We even want them to think unrealistically.  For example, there are many programs that might discourage a student from being a professional athlete, however, we encourage students to focus on those objectives because we want them to have an exciting and compelling vision for their future.” – Joseph Moheban, Co-founder and Director of Partnerships at 220

Using that vision, Joseph and Matthew help youth break down the things that they’re passionate about and make good near-term decisions to grow as individuals and professionals. Instead of being told that a career is unrealistic or lofty, students pick their ultimate job and use that as a framework for what they need to do on a weekly and yearly basis -- which helps them develop a strong foundation for career development. That principle alone would play a role in how they named their company.

“We call it 220 because it (the numbers) stands for ‘Second To None.’ Our goal is to help students create their ‘Second To None’ life, which means that they’re not comparing themselves to someone else’s life and career, but instead, focusing on their own goals and objectives.” – Joseph Moheban, Co-founder and Director of Partnerships at 220

To help students live their ‘Second To None’ life and build a strong framework for career development, 220 offers a variety of options to suit different ambitions and learning styles. First, 220 partners with a wide range of youth organizations such as afterschool programs, teachers and professors, workforce initiatives, sports-based programs, nonprofit organizations, higher education institutions, and more.

Through their partnerships and a curriculum built specifically to support students with diverse career interests, Joseph and Matthew developed three different options for 220’s users. 220 offers their users the ability to select an annual membership, which provides weekly lesson plans on personal development. There’s also a 10-week program that provides a 25-hour blended learning experience with workshops and online courses on leadership and workforce development. In addition to the 10-week program, 220 offers a custom development curriculum, which is tailored to fit unique student initiatives, plans, needs, and critical learning objectives. Through these three programs, 220 is able to provide any youth with a base for professional development.

“The hidden goal here is to teach students how to set and achieve their goals. Their objectives in life might change, but this way, they’ll leave with a process of knowing how to achieve goals and overcome obstacles.” – Matthew Moheban, Co-founder and Director of Development at 220

And speaking of overcoming obstacles, both Matthew and Joseph certainly had their fair share of challenges when they first launched 220 -- and quickly learned that actions can often speak louder than words.

“Make sure you’re solving a problem. We were not encouraged to leave our jobs, but encouraged to pursue the idea of 220 because it was so noble and because there was a need for it, so we thought people would just want to work with us, but that wasn’t the reality. People will always tell you how awesome your business is, but until they buy from you, they’re not really backing what you’re doing.” – Matthew Moheban, Co-founder and Director of Development at 220

The brothers also point out that entrepreneurship doesn’t have to follow any specific path. Too often, founders will use books offering ‘practical’ advice sandwiched between buzzwords as a template -- but sometimes, the best idea is your own.

“Entrepreneurship doesn’t have to be the venture-backed, heavy investment, high-scale, exponential growth companies that are the biggest successes or failures that the world has ever seen. We’re really proud that we’re self-funded even though that’s had its challenges, and I think that it’s important to just focus on things that are true to who you are when you’re launching a business rather than focusing on these grand solutions. Think about someone who starts their own lawn-mowing business -- that person is as much of an entrepreneur as anyone else.” – Joseph Moheban, Co-founder and Director of Partnerships at 220

It’s true. Somewhere out there, a young high-schooler is learning the ropes as the CEO, CFO, and COO of their own lawn mowing service. And though the traditional classroom certainly has its place -- it’s a safe bet that this high-schooler is getting a business education that’s second to none.