Physical health, mental health, and emotional health; these three subjects have stirred many national conversations -- but what about financial health? There’s no doctor for that. No therapist. No psychiatrist. In fact, there’s barely any education around the topic. Thankfully, Joe Holberg, Founder and CEO of Holberg Financial, is working to help today’s professionals better understand the value of a dollar. 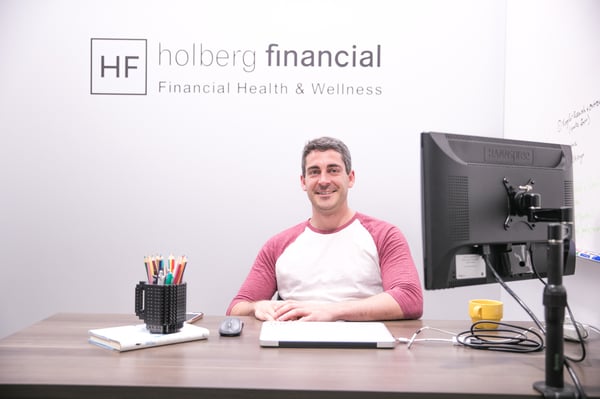 If you were able to immediately answer that question then you’re in the minority, especially since a whopping 85 percent of Americans say they’re anxious and unsure about their finances. It’s the type of financial dread that causes one out of every three employees to report that their personal finance issues have been a source of distraction at work -- and for Joe Holberg, it’s a feeling that’s all too familiar.

As a student at the University of Michigan, Holberg spent his time outside of class perfecting butter noodles and hard-boiled eggs and learning everything he could about money management. After graduating, Holberg quickly realized that his knowledge of personal finance gave him a unique set of skills that few others had cultivated.

“I joined Teach for America after college to teach middle schoolers math and created a classroom economy so students could learn skills and lessons about managing their money. Later on, I went to work for Google and I realized that I was having the same conversations about finance management with Google employees that I had with the middle schoolers.”

It was a revelation for Holberg -- after all, he was having these conversations with some of the smartest people he’d ever worked with. The experience gave him time to reflect on an idea he’d been mulling for a while now: what if there was a way for companies to help their employees better manage their financial lives?

“There’s really no school or program that you can go to where you can actually learn about personal finances. It’s really a challenge for folks in the workforce because nobody taught them how to navigate an IRA or a credit report, so I wanted to create something that could help them do that.”

And that’s when he started working on the blueprint for the business that would quickly turn into his passion and career -- Holberg Financial. Using a B2B SaaS model, Holberg Financial provides companies with the ability to offer a financial health benefit for their employees. While companies must pay to use the platform, it’s completely free and unbiased for employees.

“Companies that have used our platform often come back to us and say that it’s really helped them retain employees and increase productivity. And then, when we look at averages, we see that employees are able to build their net worth by over $3,000 in less than a year and significantly reduce their debt profile as well.”

To help employees budget wisely and improve their financial savvy, Holberg takes an action-based approach. He says that, although people crave financial security, most are often not proactive enough to work towards it.

“If you want financial health, you need to have a formula and a goal that you can work towards. One of the reasons we’re different from something like a Mint.com is that we don’t just provide an overview, we also help people develop a goal-based plan of action. It helps people recognize that personal finance is a fixed pie and allows users to come up with prioritized goals that they can set, track, and eventually realize.”

And by every measure, Holberg’s platform is hitting all the right notes. On average, Holberg Financial has helped its users increase their financial health score by 6.3 points. He’s also partnered with a number of other companies that are helping young professionals better manage their finances including Peanut Butter, a fellow 1871 startup which gives companies the ability to offer student loan assistance as an employee benefit.

Holberg’s efforts haven’t gone unnoticed; he was was recently named to Chicago Scholars’ prestigious list of 35 Under 35, and he was also invited by his alma mater, the University of Michigan to deliver a Ted Talk. You might think that running a company and presenting at major speaking opportunities is enough to keep an individual busy, but Holberg -- who has budgeted his time as well as his finances -- has somehow authored and published a book (or two) during the last 18 months.

“A lot of what you read in the book is similar to what we provide at Holberg Financial because the focus is to help professionals walk through important financial lessons and build a strong financial foundation. I was actually still writing it when I came to 1871’s mentor office hours and ran into Zack Price -- a serial entrepreneur who just happened to be a publisher.”

And Price wasn’t the only one impressed with Holberg. In fact, when Holberg started fundraising, his hard work helped him secure a key investor early on.

“I actually asked former 1871 CEO Howard A. Tullman if he would be willing to be an investor and he said ‘yes.’ That was a big win.”

Although it may seem like it’s been all green lights for Holberg, that hasn’t always been the case. Like many entrepreneurs, he’s heard dozens of no’s for every yes. However, Holberg says that founders can learn just as much -- if not more -- from their bad experiences as they can from their good ones.

“I remember being told that I had made a huge mistake by putting my own name on my  business. The rule is, ‘you don’t put your name on the door.’ Obviously it didn’t change the way I did things, but I still gave it some thought. People are going to tell you that your idea sucks, but that doesn’t mean that your business sucks. It’s always worth listening, analyzing, and reflecting on criticism because there might be something you can take from that. You have to be vulnerable and put yourself out there.”

Yet even though Holberg has a good outlook on criticism, there are still days when it affects him. He says that he pushes through because at the end of the day, there’s nothing else that he’d rather do.

“You’ve got to love what you’re doing and you have to believe in what you’re building. Those two things give you the motivation to push pass the ‘no’s’ and to work when no one else sees your vision or what you’re trying to change in the world. It also gives you that sustained energy to hopefully build something really cool one day.”

And being in good financial health sounds pretty cool to us.