Food For Thought: An Exclusive Q&A with The Hungry Hound

We’re excited to share a memorable Q&A session with Steve Dolinsky, one of Chicago’s most well-known food reporters -- you probably know him better as The Hungry Hound on ABC7. In this interview with 1871’s Kat Rokhlin, Dolinsky shares his thoughts on Chicago’s best eats, entrepreneurship, and his new book, Pizza City, USA: 101 Reasons Why Chicago Is America's Greatest Pizza Town.

Thanks so much for joining us today, Steve! I know that you’re writing a new book on why Chicago is the best city for pizza – tell me a little bit more about how that got started? 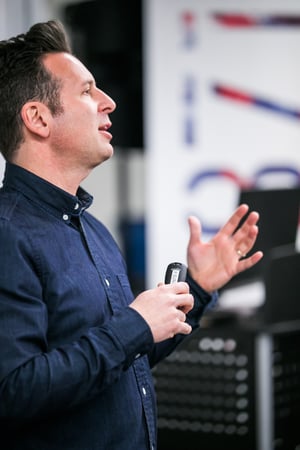 Well, I’ve always thought that Chicago was a town renowned for its pizza – but in the context that we’re a deep-dish town.

When I originally pitched this book to Northwestern University Press, they said how about 101 reasons why Chicago is the greatest pizza town in the nation? Well, to get that many recommended, that meant I had to eat at another hundred or so pizzerias. I actually went to 180 pizzerias to get to 101.

The book is divided into 10 styles of pizza -- which is why I think we are a superior pizza city, and I’m firmly of the belief that Chicago is actually a thin-crust, tavern or square-cut style as opposed to deep-dish. I think deep-dish is to Chicago what Times Square is to New York City.

That’s a good way to put it. So what was your favorite style out of all of those?

I tend to gravitate towards artisan pies because they have a long fermentation time and complexity, not to mention that there are usually talented chefs behind them. It’s not just someone slinging dough and throwing it in the oven -- so they take more time with not only the dough but they care about the ingredients, the toppings, and the cheeses -- these are just really, really thoughtfully sourced ingredients.

It’s a style that has what I call the perfect OBR, or Optimal Bite Ratio, where the cheese, the sauce, topping, and dough is just perfect with every bite.

Speaking of favorites -- is there a style of pizza that you really like, but doesn’t get much attention? What would you say is the most underrated pizza in Chicago?

I think it’s the tavern style, I really do; if you’re not a native Chicagoan, then you probably don’t understand how important that square-cut, tavern style is in the city. It should have an audible crunch when you bite into it, it shouldn’t be greasy underneath, and it shouldn’t be soggy or limp at all. Some places like Home Run Inn will actually serve it in a dimpled pan which elevates the bottom a little bit so that air can circulate underneath -- like when you’re cooling cookies.

I think the tavern style is the most underrated; in fact, a writer from Bon Appétit Magazine reached out to me about a week or so ago to talk about why Chicago tavern-style hasn’t become popular outside of Chicago.

We'll start telling people about it! So here at 1871, were all about entrepreneurship and you definitely embody the entrepreneurial spirit. What do you think are some of the top traits that successful entrepreneurs share?

You have to have drive and commitment because a lot of times, you’ll wake up in the morning, open your inbox, and see one rejection after another. You don’t want to get discouraged when that happens and that all leads back to having the right drive, the right commitment. With this pizza book, there were days when I just didn’t want to see another pizza, and I think that determination was really important for that.

You also have to find the right people to surround yourself with -- the people that will keep you motivated, that will drive you. My kids got involved in this book, my wife got involved with this book, it really sort of became this family project. That’s one huge part of putting the book together, and then doing all the marketing and promotion for it, whether that’s finding the right sponsors or getting people for the podcast, all of that is about reaching out to your network and asking for help. You can’t be afraid to ask for help because we all need it at some point.

Speaking of your podcast, “The Feed Podcast” — which you do with Rick Bayless — I was curious as to how that got started?

We were both talking about doing a radio show because we couldn’t understand why Chicago didn’t have a full-time, weekly radio program around food. After years of trying to get on local radio stations, Rick’s wife suggested that we should do a podcast to see if we could get any traction and maybe even lead to a radio show. We started a podcast in 2014 and at first, we didn’t know what we were doing, but we kept on tinkering and it kept snowballing. Eventually, it became a weekly show, and we somehow figured out a way to carve this into our schedules.

Rick is more busy than I am, but we work to find time to record the show and many times we’ll end up recording six or seven shows in one day since that’s the only day we can meet during the week.

That’s a lot of shows! How do you decide which segments and topics that you’re going to cover?

We always do two ingredient challenges every time we get together. For example, we’ll do a fennel challenge -- where we ask another chef to come in and they bring five additional ingredients and set the timer for 15 minutes. During those 15 minutes, both the chef and Rick make one dish with fennel as the main ingredient.

It’s great because we learn all types of hacks, shortcuts, and tips and of course, the audience actually gets to hear them cooking, so it’s very authentic and they can feel like the are a part of the program. We’ll also do a food reporting show where I’m in Southeast Asia talking about unique foods or food trips, and that’s something that’s really interesting to me.

Do you remember the first podcast that you ever heard?

I can’t say with a hundred percent certainty, but I think it was a podcast from This American Life. I do remember listening to the first season of Startup and that’s when I really got into podcasts and started paying more attention to podcast ads, breaks, production, music, and length. It really got me thinking about the structure of a podcast. 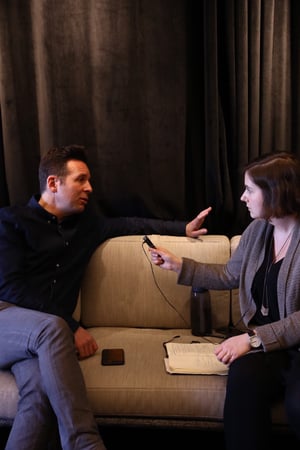 I want to pivot a little bit to end this interview. We have a program here at 1871 called ChiBuys, which supports local minority- and female-owned food vendors with our catering dollars. Can you speak to the importance of Chicagoans patronizing local and diverse businesses?

It’s what makes us Chicago and not Lincoln, Nebraska. I’m from a very small town in Minnesota and there were 10 Jewish families there -- we were like foreigners in a foreign land. I love that there is this program for female-owners and minority-owners; in fact, my wife and I have a business and she owns it. We want to promote female-owned businesses and minority-owned businesses because that’s really what makes our city so great.

It’s a beautiful patchwork of all kinds of colors and backgrounds. We talk about Korean barbecue, I can go just about anywhere in the city and experience a little bit of Seoul. I love supporting local, independent artisans -- there’s no factory, there’s no mass production -- it’s all passion, and female, minority, or otherwise, you can’t help but support someone like that.

Follow Steve Dolinsky on Twitter @stevedolinsky or check out his podcast with Chef Rick Bayless at www.thefeedpodcast.com.