1871 and the Chicagoland Entrepreneurial Center (CEC) are proud to host the 11th Annual Momentum Awards Dinner. The dinner will celebrate emergent technologies, leaders, and opportunities that are demonstrating change and innovation. Furthermore, five awards will be presented for outstanding contribution and impact to the Chicago Tech and entrepreneur community. 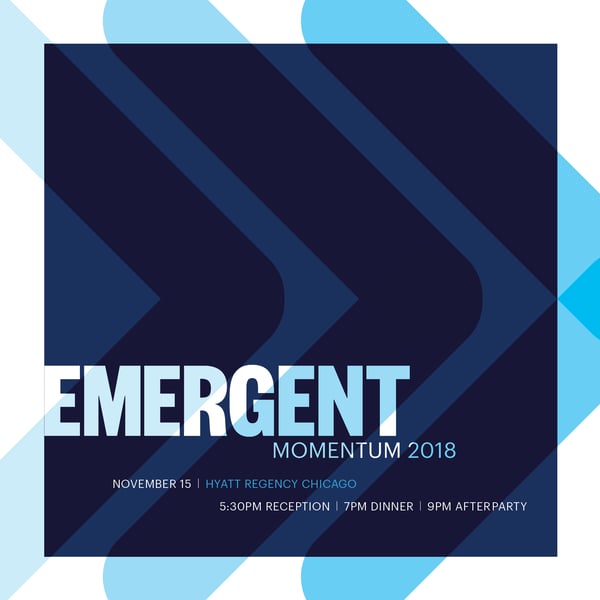 As one of the tech community’s most highly-anticipated events in 2018, the 11th Annual Momentum Awards will observe the theme of an Emergent tech ecosystem, which includes the emerging technologies, leaders, and opportunities that embody the creative potential of change and innovation. These exciting pathways of possibility are illuminated by the brightest minds and blazing visions of the Chicago entrepreneurial community.

Awards will be presented in the following categories:

The Chicagoness Award: Bestowed upon individuals or companies that exemplify the values of the Chicago entrepreneurial community, which include hard work, inclusion and commitment to collective opportunity. Past recipients include Impact Engine (2015) and Outcome Health (formerly ContextMedia) Co-Founders Shradha Agarwal and Rishi Shah (2016), and music artist Lupe Fiasco (2017).

1871 supports its member companies through a host of resources, including access to hundreds of mentors, workshops, panels with top tech leaders, a state-of-the-art space and staff that encourages collaboration and community building. It has also been ranked as the top university-affiliated tech hub in the world by UBI Global as a result of its strong partnerships with seven area universities. 1871 maintains partnerships with some of the world’s largest corporations, including Bosch, Microsoft, JPMorgan Chase, Google, Comcast, and BMO.

1871’s evolution has also contributed materially to the diversity of entrepreneurship in Chicago. Through its WiSTEM program for women-led businesses and its joint Latinx Incubator with the Illinois Hispanic Chamber of Commerce, 1871 is encouraging and supporting innovation by encouraging greater representation and inclusion in the tech economy. Every facet of 1871’s operations, from individuals chosen to speak on panels, to minority suppliers, and even its own staff, is reflective of the city of Chicago.

Interested in attending the 11th Annual Momentum Awards Dinner? You can register to attend the event here.