"Yes, and" needs a reboot. Dave Collins, Founder and CEO of corporate skill-building consultancy Oak and Reeds, shows us how to use improv to create more productive collaborations at work. *Team-building exercise included! 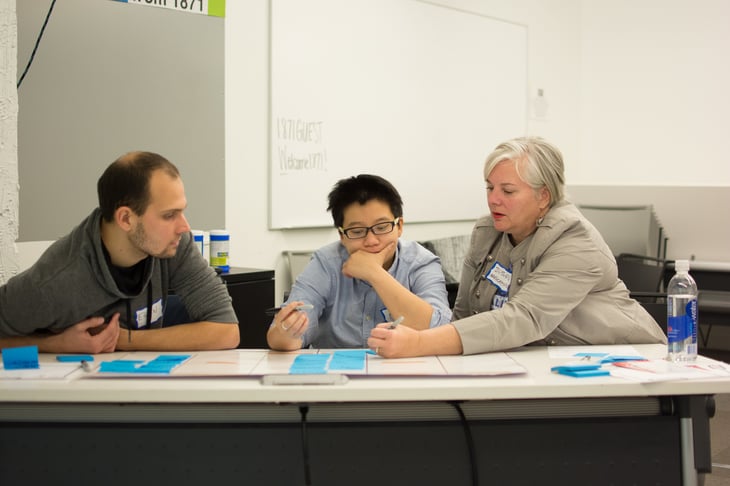 Creating more “Win Win Win” opportunities is my 2018 resolution. “But Dave!” I can hear you saying, “That sounds like meaningless jargon. What are you actually talking about?

The concept of “Yes, and” has been, in my opinion, beaten to death in the business community. That’s in no small part to consultants and trainers (like me!) who use this concept as a panacea for solving collaboration skill-building challenges.

“Yes, and” implies there are only two people in a collaborative transaction; one to share an idea, and the other to build on it. Why is that wrong? Because 99% of real-world challenges, upon closer inspection, involve multiple parties. These challenges can’t be solved with pairs of neatly organized “call and response” surface-level solutions.

Collaboration at work is messy and confusing. How can we fix that this year?

My solution? Include a third person. We need to start approaching challenges with a question: “Who is the third person we’re not discussing here? What do they want? What can we give them as part of the solution?”

Why is including the third person important?

Boolean, “ones and zeros” logic is built into every piece of technology we have, but that doesn’t mean we as humans have to problem solve like an AI robot. Moving away from binary, Yes/No decision-making helps us think about the ripple effects of our decisions in a more comprehensive way.

It’s simple to focus a team on hitting a single metric or target. It’s much much harder to keep multiple goals in your team’s crosshairs.

Think of it like exercise (metaphor alert!). It’s easy to pick up a weight with your arm and curl it up to your shoulder. It’s much much harder to do the same movement while balancing on one foot on an unstable surface. You get much more out of a workout if you can engage balance, stability and kinetic challenges into the same movement. The same logic applies when building collaborative problem-solving skills with your team.

The more inputs you can bring to the table, the more you’ll build your team’s ability to think dynamically about multiple stakeholders.

How many customers, internal and external, do you have? I’m talking about your team, the cross-functional teams you require input from to approve budgets, your customers, their bosses determining their budgets, etc. How often do you actively think of ways to bring wins to those farther down the list?

If you can think about a third person’s relationship to a deal or solution, then you can start to think about a fourth. Then a fifth. Keep these small stakeholders top of mind and you’ll discover easy wins that come at little to no cost for the larger initiative.

Today we’re looking at how to demonstrate the power of “Yes, and, and” to your teams. The following exercise is something you can do at the beginning of your weekly team check-in meeting or in the first five minutes of a daily standup.

Skill: Practicing “Yes, and, and”

Instructions: At the beginning of your next team meeting, gather attendees together in a standing circle. Let them know that you’re doing a warm-up exercise to get collaborative juices flowing. To introduce the exercise, say:

“This exercise is called, 'I’m a Tree.' It sounds silly, but it’s a really effective seven-minute warm-up for setting a collaborative tone in this meeting.

Let’s form a circle. I’ll start the exercise by walking into the circle and pretending to be a tree by saying “I’m a tree!” Next, someone will join me in the circle, add something to my tree and say something like “I’m a bird!” and rest a pretend bird on one of my beautiful (and pretend) arm branches.

Then a third person will add something to the scene, for example: “a park bench under the tree”.

Once that third person has entered the circle, we prepare to repeat the exercise in the following way: The original person in the scene, in this case me, the “tree”, will take something out of the circle by saying “I’ll take the bird”, leaving only “the park bench”. That person stays and continues to be the same thing. They’ll start a new sequence by saying “I’m a park bench.” Then someone new adds something to the bench scene, (i.e. “I’m a person sitting on the bench”) and off we go!”

Facilitation: The group will be reticent and slow to participate at first, but will quickly get excited by the possibilities they can create together. Encourage people to jump in whenever they have an idea, even if it’s not perfect, in order to support the other players.

Continue repeating these steps for 5-7 minutes or until you feel the group has reached a high-energy stopping place in which to begin the debrief. If you’re short on time, skip the debrief and go directly into the rest of your agenda.

This is “Yes, and, and” in action. Adding a third idea opens up opportunities for unexpected, creative solutions. In the context of this exercise, the group is building out an interesting scene. In a work situation, it means adding additional opinions, ideas and solutions into a idea-generation process.

It’s tough being the first person out in the circle waiting for someone to come in to support them. Finding ways to be the “second” to someone’s idea in a real setting is a great way to support teammates or clients and create a collaborative atmosphere.

Be on the lookout for people that are great at “seconding” and those that prefer adding the “three” for a big laugh. Typically the funniest part of this exercise is the third idea added (see: rule of threes), but that doesn’t mean it was the most important. Often, the second idea won’t be that funny, but a clear and deliberate choice will dictate the entire direction of the scene and set up a hilarious “three”.

After you try this out, let me know how it goes! I’d love to hear how this approach changes the way you look at the challenges you’re addressing in a particular meeting or collaborative setting.

By becoming an 1871 member, you'll have access to the 30+ workshops a month that will teach you everything from funding strategy to marketing and sales to team-building. Get started by visiting 1871.com/membership.

Interested in leading a workshop at 1871 or becoming a mentor? Apply at 1871.com/become-a-mentor.

Dave is an award-winning improvisor, coach, and corporate strategist. He began performing improv in 2005, and after a move to Chicago, began teaching and coaching in 2007. Along with his teammates, Dave won the National Collegiate Improv Tournament, headlined shows across the country, and individually has coached hundreds of students and professionals in the art and practice of improv. Dave applied his analytical and facilitation talents in his work as a workplace strategist and change management expert at AECOM Strategy Plus. As a workplace strategist, Dave worked with clients to examine the relationship between workspace and productivity, enabling people to break old habits and embrace change.

Today, Dave works with his clients to find innovative ways to develop practical business skills through the use of improv training. Like Aesop's fable about the Oak and the Reeds, he believes that modern organizational cultures must incorporate basic improv tools and techniques in order to be flexible enough to survive and thrive through any storm.