The debate used to be about carrot or stick in coaxing performance out of your people. In a more nuanced business world, setting the tone may be as important as setting the guidelines. 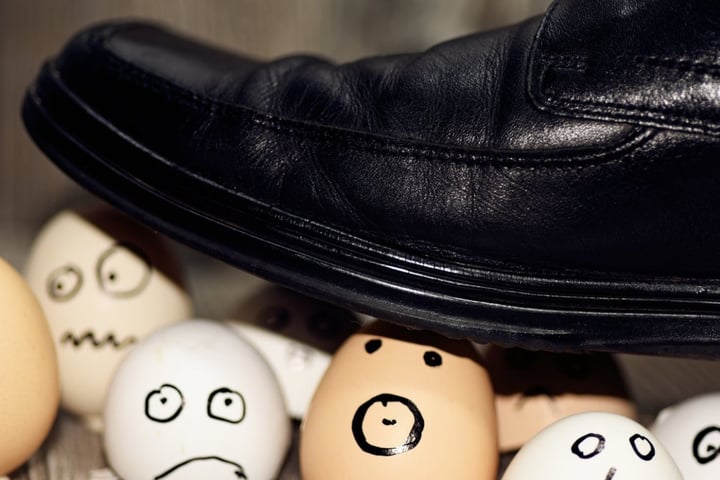 These days the old HR rules and standard practices and behaviors, which never meant much anyway in the startup world, are changing so rapidly that the management approaches and motivational strategies that used to work may or may not get the job done today. There's no longer a simple rule book that's worth anything in a world where no one knows what's politically right or wrong from day to day.  I'm not talking here about the current conversations regarding sexual abuse and harassment. Those are black and white cases of stupidity or criminality and have no place in any business.

But when you're trying to build your company culture from scratch, along with everything else, ambiguity about how you and your team members treat each other is the last thing you can afford. Language, lectures, liquor, looking at someone the wrong way-- these are all potential land mines and I guess we're gonna need new signs saying "huggers beware" in our lounges. Thumper used to tell Bambi to say nothing if she couldn't say something nice, but the best advice today seems to be to say nothing at all if you want to stay out of trouble.

Of course, that makes it tough to run your business. So where do we go from here?

There have been debates among business consultants and corporate shrinks for centuries over whether the carrot or the stick is the most effective motivation tool. As far as I can see, the jury is still out. And it's getting more difficult all the time to determine how to move things forward without going too far. I'm talking about everything from how you talk to your team to trying to "tell it like it really is" to people inside and outside your shop. We live, increasingly, in an eggshell world and things that were common practices and words that used to be "aw shucks" are now likely to cause some awful anguish and some very unhappy people.

Part of the problem is that a lot of the effectiveness of the approach you pick depends on the particular context of your communications, the relationships between the concerned parties, and even on the type of business or industry itself. For example, we see both approaches in politics every day. One politician threatens his opposition (and even the people in his own party) with all kinds of grief and retribution-- funding new primary opponents, pushing them to vote publicly for unpopular bills or initiatives, badgering them from his bully pulpit.  Another one takes the exact opposite tack:  he'll always have your back if you're in his party,  he'll never put you between a rock and a hard place with your constituents, and he'll do everything in his power to make sure your seat is safe. As we know, keeping your seat and your job is what it's actually all about for these guys. As my old friend Bill McGowan (founder of MCI) used to say: "these guys have great loyalty to their businesses, but their number one loyalty is to their own tush." In your own case, you've got to decide what's likely to be the best way to deal with your people, your partners and vendors, and the public at large.

It's also becoming clear that there may be significant changes in what will be effective depending on the ages of the people you're trying to influence and incentivize. We keep hearing about young people who want to work for a company with a cause; one that's more than just building the bottom line. The incentives that will matter to them and, in fact, their own goals are likely to be a lot more complicated than those of your longer-term team members. And there will be a sub-section of these newbies who haven't really decided what their own goals are or should be. That turns them into moving and very complex targets. They're clearer on what they don't want to be a part of than what's important to them, or how they plan to weigh and balance the life challenges and choices we all have to make. This is just like looking at art: easy to tell what you don't like, hard to know what's good and likely to matter over time. And if you think evaluating inanimate objects is tough, getting an accurate read on the folks who work for you makes art criticism look simple.

These days a supervisor or manager can inadvertently "disrespect" someone when he or she is only trying to suggest a better way to do their job. I say "suggest" because it seems that no one today actually gets to "tell" anyone how to do anything. Things can't be improved and businesses aren't going to get better when we spend more time tap dancing around people's feelings than we do focusing on the facts of their performance. We can't all be winners and wonders all day long.

There's also a pretty convincing school of thought that says motivation is not something you do to people. Rather, motivation is something that comes from within them, provided that (a) you do a good job of setting the stage and creating the right environment and culture and (b) you do an even better job of not demotivating them. It's all bi-directional. As I used to tell the faculty when I ran Kendall College and Tribeca Flashpoint, it's not what you teach, but what they learn that matters. And no one learns much of anything if they don't actually care.

I think we're at an important crossroads right now because there's no more important determinant of the likely success of a new business than the passion and the emotions of the people driving it forward. If we're all increasingly afraid of our own shadows, scared to reach out to others and share our feelings, and afraid to connect closely to the people we work with and care about, we're not going to be building the kind of businesses in the future that anyone can be proud of.