Teaching Code in a Language Every Kid Speaks with Codemoji

Livio Bolzon of 1871 member company Codemoji has developed a platform to help students learn HTML and CSS using curriculum written in a language nearly everyone can recognize: Emoji. 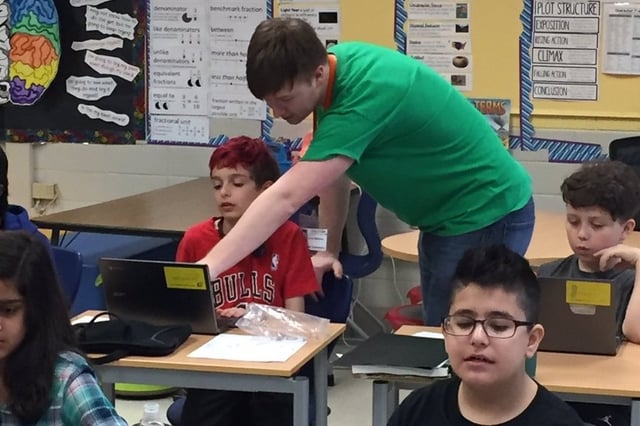 You could argue that emojis are having a moment.

Sure, the omnipresent symbols for just about everything constantly dominate our digital devices. But the cute, creepy and sometimes controversial symbols are penetrating popular culture, and it’s hard not to notice. Just this week, Apple announced a new batch that will be hitting phones later this year -- including a vomiting smiley (ew), a zombie (awesome) and a sandwich (about time). The announcement was timed along with World Emoji Day -- which was Monday, July 17, ICYMI -- and just before the world premiere of The Emoji Movie on July 28. And let’s not even get started on the “emoji sheriff” meme that came and went in early July.

It’s both the popularity and the universality of emoji -- they transcend language, age and cultural barriers -- that inspired 1871 member Livio Bolzon to found Codemoji, an online EdTech platform that uses emojis to teach first through sixth graders how to code.

“Code is universal. It doesn’t matter what gender you are or which language you speak,” he said. “Emojis are the same way. You don’t have one gender group or one ethnic group that uses them.”

“Code is universal. It doesn’t matter what gender you are or which language you speak,” he said. “Emojis are the same way. You don’t have one gender group or one ethnic group that uses them.”

Bolzon co-founded Codemoji just last year, and since, the platform has reached nearly 75,000 students. The platform uses easily distinguishable symbols students can use to associate with high-level coding concepts. The stoplight emoji, for example, is associated with the start or stop of the <html> tag and the camera emoji represents <img> tags. Students can easily drag and drop the symbols into a document, allowing them to write and eventually run the code to see the results.

Since their founding, the company has participated in the RedEye “Big Idea” Award competition, andprovided content for last year’s national “Hour of Code” initiative, both of which Bolzon said have been big boosts to business. He said the company is now focusing on getting the platform in the hands of as many educators as possible. He hopes the platform is easily adaptable curriculum for teachers who sometimes struggle to explain computer science concepts to young students, but also hopes to inspire the next generation to continue learning to code.

“We went into a couple schools (early on) and they were just so excited,” he said. “Emojis and coding? That just blew their minds. None of the kids were bored.”

“We went into a couple schools (early on) and they were just so excited,” he said. “Emojis and coding? That just blew their minds. None of the kids were bored.”

Accessibility of the platform is also of concern to Codemoji, Bolzon said. Growing up, he struggled with Dyslexia during his early school years, where a visual platform like Codemoji would have been useful in engaging him in the classroom. The company even recently introduced “text-to-speech” in the platform to help students with similar learning abilities.

“At the heart of Codemoji is a deep belief that learning to code should not be hindered by a lack of proficient typing or confusing syntax, but rather focused on creating, building and mastering the fundamentals of code,” he said.

Bolzon said he and his partners are continuing to develop the platform and curriculum, particularly aimed at more advanced coding concepts that will begin to phase out the emoji characters as students begin to grasp the concept without them. As they transition their site to a “freemium” model, they are still looking to greatly increase the amount of students they reach.

“We want to reach millions,” he said.