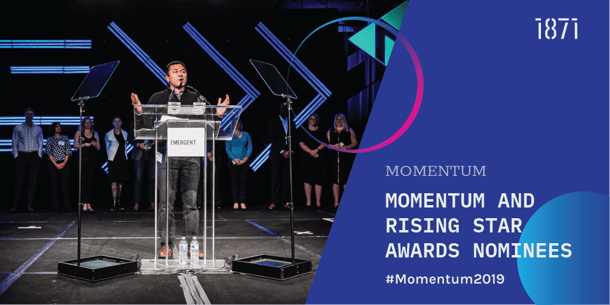 CHICAGO (August 19, 2019) -- 1871 and The Chicagoland Entrepreneurial Center (CEC) announced Monday the nine finalists for the 12th Annual Momentum Awards. The Momentum Awards are separated into two categories; the Momentum Rising Star Award, which recognizes a company that is early in its progression, but has a proven track record and the potential to grow into a leader in its industry, and the Momentum Award, which honors a seasoned company that has demonstrated significant growth, received external funding, and has made a substantial impact on Chicago’s tech and startup community.

“The finalists for this year’s Momentum Rising Star Award and Momentum Award reflect Chicago’s extraordinary community of founders and innovators. I’m honored to recognize all of our finalists for their achievements and commitment to our city’s tech and entrepreneurial ecosystem. Each one of these companies serves as proof that Chicago is one of the best cities in the world to build a business.” – Betsy Ziegler, CEO, 1871

Nominees for the Momentum Rising Star Award include:

“This year’s finalists for 1871’s Rising Star and Momentum awards are emblematic of Chicago’s role as a destination for starting, growing, and nurturing cutting-edge technology companies. In true Chicago fashion, these companies create jobs, mentor the next generation of entrepreneurs, and give back to the community civically and charitably, further cementing Chicago’s reputation as a global beacon lying at the crossroads of innovation and entrepreneurship. It’s a privilege to recognize their efforts and achievements.” – Larry Eppley, CEC Board Chairman

Nominees for the Momentum Award include:

In addition to the Momentum Rising Star Award and Momentum Award, several other honors will be presented at the 12th Annual Momentum Awards Dinner on September 19, including the Corporate Champion Award, the Entrepreneurial Champion Award, and the Chicagoness Award. The event will be attended by Chicago’s best and brightest tech innovators, corporate leaders, and civic supporters. It is the largest gathering of the tech community annually and the primary fundraiser for the CEC, which supports the activities and operations of 1871.

Founded in 1999, the CEC is a non-profit organization that supports entrepreneurs on their path to building high-growth, sustainable businesses that serve as platforms for economic development and civic leadership. Its flagship project, 1871, fulfills CEC’s vision of a central address for entrepreneurs in Chicago. The CEC runs and operates the workspace, develops programming, organizes events, and ensures that the culture of 1871 allows entrepreneurs the greatest opportunity for success

1871 is a not-for-profit organization that exists to inspire, equip, and support founders to build great businesses. It is the #1 ranked university-affiliated business incubator in the world, and the home of ~500 high-growth technology startups and ~1,500 members supported by an entire ecosystem focused on accelerating their growth and creating jobs in the Chicagoland area. Located in a 140,000 square-foot space in The Merchandise Mart, 1871 has 350 current mentors available to its members, as well as more than 100 partner corporations, universities, education programs, accelerators, venture funds and other organizations that make its extensive matrix of resources possible. Visit www.1871.com for more information.