This morning 1871 was lucky enough to have Mark Achler, Senior Vice President of New Business, Strategy, and Innovation of Redbox, come speak on the importance of integrating values into company culture. Starting off his early morning presentation with a round of heartwarming jokes, it was clear how important connecting with people is to him.  A string of notable accolades under his belt, notably the serial entrepreneur of four companies, a partner at a venture capitalist firm, and currently an intrapraneur at Redbox, Achler could only stress the importance of values in helping him through every step of his career. 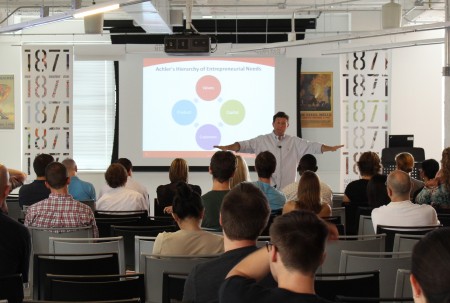 The general assumption is that a combination of these three will produce lucrative results. However, Achler draws from his well-rounded business background to argue that there is not just one, but seven items missing from this list. They are a set of simply worded values created by Redbox CEO Gregg Kaplan reflecting the simplicity of the company itself. Using personal examples, Achler laid out the following values for maintaining a healthy company culture:

Attended by more than 65 member of the startup community, the overall sentiment was that it was a rewarding presentation and a great start to the morning. Achler ended by emphasizing “that CEOs who are thoughtful and considerate of the importance of values, who create a culture that is values-driven, ultimately make better decisions and deliver better results.”