Is Your Business a Venture?

1871 Says: This post is part of the Hyde Park Angels Entrepreneurial Education Series at 1871, which brings together successful, influential entrepreneurs and investors to teach entrepreneurs everything they need to know about early-stage investment through events, articles, videos, and more. If you are interested in learning more about whether to raise a fund, register for “Are You Ready to Raise?” on March 5.

Before you begin the long, complicated quest for investment, you need to make sure it’s the right decision for your business. There are a lot of questions to ask yourself when deciding whether to raise a round, but here’s the most basic: is this a venture? Not every business is. In fact, some of the best businesses — ones that address underserved needs, boast the highest caliber teams, even bring in constant revenue streams — are not.

VC’s are looking for concepts and companies with hyper-growth potential — those with the possibility of getting to $100M in annual revenue relatively quickly. So how do you know if you can get to that kind of revenue?

The question boils down to market size. You have to find your total addressable market. Don’t size it to reflect what you think investors want; that’s a classic mistake entrepreneurs make. Start with the truest assessment you can. Remember, you’re doing this to make the right decision for your business, which means you need to stay objective. You can think about investors later.

How to Find Your Total Addressable Market

Let’s say you’re in the children’s clothing resale business, like our portfolio company, MoxieJean. Your business is focused on the U.S., middle income families, and children ages 0–14. The first step is to figure out how big the children’s clothing market is since that’s your largest addressable market.Determine how much it costs to raise children in middle income families from the ages of 0 to 14. 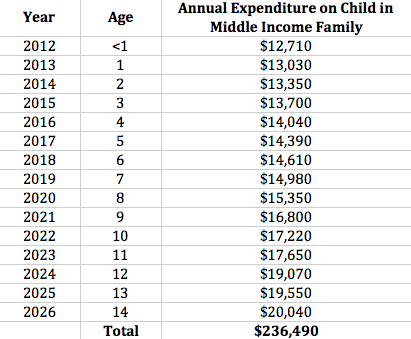 Now that you know how much families spend on raising children, go a step further. What percentage of the total cost of raising a child is spent on clothing? 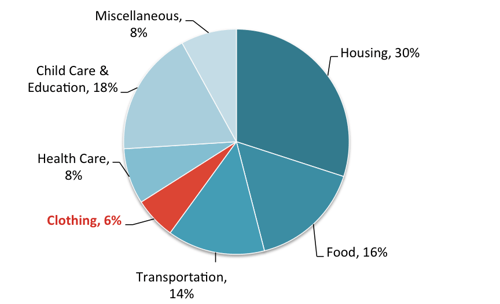 From here, you can determine how much middle income families spend in dollars on children’s clothing. 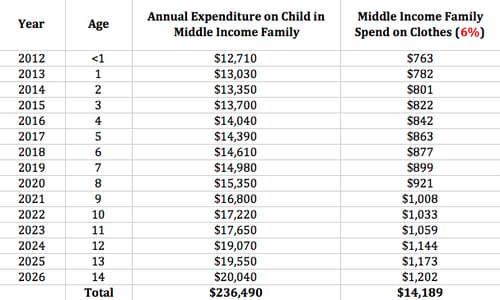 Now you can extrapolate what average yearly expenditures mean for the entire U.S. population. Since U.S. births totaled approximately 4 million in 2010, you can estimate that there are approximately 60 million children ages 0–14. So:

Round that up to $57B and…you’re still not done.

Remember, this business is not just for children’s clothing, but resale. In other words, you need to size your market down.

What matters most for you is how much your annual average cart size is. Let’s estimate that number at $100.

Except, that’s not a realistic sizing. It’s highly unlikely you will capture 100% of your target market, especially since the first sizing you did was for the total children’s clothing market, not the used clothing market. So let’s assume that this is an extraordinary business with a better user experience model than the biggest resaler, eBay. You’ll say you can capture 20% of this market.

What have you learned? You’re playing in a $57B market, your total addressable market is $6B, and your market share will probably hover around $1.2B. So, is this a venture?

This part is a lot less scientific. In fact, depending on what kind of investors you’re looking to work with, this number changes by the hundreds of millions.

The golden number for mid-stage investors generally lands at $1B or more.$1.2B would make sense as a venture for angel groups and venture funds. Early-stage investors would look for less, as small as $500M.

But let’s say you’d done all of this sizing and landed at somewhere between $30M and $50M. That isn’t half bad. Just because your business isn’t a venture doesn’t mean that it’s not a great company. In fact, you might end up making more and keeping more control than you would have otherwise.

About Hyde Park Angels
Hyde Park Angels is the largest and most active angel group in the Midwest. With a membership of over 100 successful entrepreneurs, executives, and venture capitalists, the organization prides itself on providing critical strategic expertise to entrepreneurs and the entrepreneurial community. By leveraging the members’ deep and broad knowledge of multiple industries and financial capital, Hyde Park Angels has driven multiple exits and invested millions of dollars in over 30 portfolio companies that have created over 500 jobs in the Midwest since 2006.

About the Authors
Michael Sachaj
Michael is the Associate Director of Hyde Park Angels. He leads HPA’s investment opportunities through sourcing deals, conducting due-diligence, and providing oversight of the University of Chicago Booth Associate team. Michael joined Hyde Park Angels after spending three years as a strategy consultant with Booz Allen Hamilton in Washington, D.C. where he worked on a variety of process and customer service improvement efforts. He earned a BA in Political Science from Northwestern University in 2009.

Alida Miranda-Wolff
Alida Miranda-Wolff is Associate Manager at Hyde Park Angels. Her role includes creating and executing marketing and communications strategies, planning and managing events, fostering and maintaining community and industry partnerships, and managing membership. Prior to joining Hyde Park Angels, Alida served as a manager, data analyst, and publication specialist at a multibillion dollar industrial supply corporation. She has lead one of the most successful Kickstarter campaigns in Chicago history and worked with half a dozen startups in various marketing, content creation, and project management roles. Alida believes in creating valuable, spreadable multimedia content, and has done so as a freelance writer for several print and online publications.