That’s the word vibrating in my mind after two weeks in Silicon Valley at the Google for Entrepreneurs/Blackbox Connect accelerator program.

You might think the word “unicorn” would be front and center and, yes, that’s a part of possibilities. While becoming a unicorn company (a tech startup valued at $1 billion or more) is rare, there’s more potential for becoming one than ever before. In fact, there are reportedly 90 of these mythical creatures (http://mashable.com/2015/05/08/siliconvalley-unicorn/) in existence, and growing.

The very word unicorn opens up a world of possibilities; possibilities that expand the mind to inhabit a universe in which mere mortals can achieve magical things. I have always believed, but now I can more clearly create the path to achieve.

First, the story of how and why I got invited by Google/Blackbox to spend two weeks in Silicon Valley with 19 other female founders from around the world in an immersion program for the most promising global startups.

Google for Entrepreneurs aims to accelerate the success of startups. One of the ways they do this is by partnering with communities like 1871, the Chicago incubator in which my company, 30Second Mobile, is based. Google also partners with Blackbox, an organization empowering born-global startups with Silicon Valley resources. Together, Google and Blackbox identified the most promising founders/startups from hundreds of nominations submitted by partner organizations around the world, including 1871. After making it through the 1871 filter and the Google/Blackbox interviews and selection process, I was invited to participate in the program. As excited as I was to be selected, I had no idea how much of an impact it would have on me. 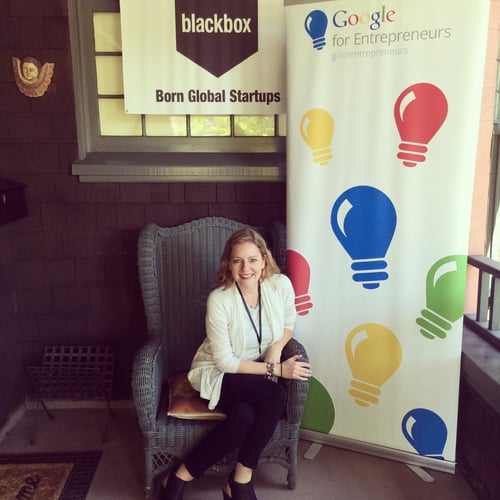 Five of us were from the United States. The other 15 hailed from as far away as Australia, India, Uganda and Dubai to as close as Germany, France, Ireland and Canada. The companies had all launched a successful product with consumer/client traction and had raised their first round of capital. We found camaraderie among likeminded women entrepreneurs, which provided a rare opportunity to be understood and supported in a powerful way by our peers. Living and working together and sharing meals, outings, seminars, workshops and even late-night conversations by the firepit, created an invaluable sisterhood. Connections were made, collaborations were formed and the inspiration I got from being with these founders – each of them a rock star in her own country – alone was enough to make clearing my schedule for two weeks worthwhile. But wait, there’s more…

The Blackbox team, led by Fadi Bishara, is a dynamic and driven group of pros who know the ins and outs of Silicon Valley. They made the nonstop pace and intensity of our two-week program seem effortless. Arriving at the Blackbox “mansion” before breakfast and leaving way past dinner every night, they were our constant advisers and connectors. They had our backs, which made everything else seem easy. The impressive program they put together included hands-on workshops to help propel our businesses, and speakers who navigate Silicon Valley brilliantly (and who schooled us daily). Each day was a gift to be unwrapped; but even more important, each day’s potential was fully maximized. Not a single moment was wasted – even “downtime” was productive, whether comparing notes over a quick lunch or finding a few seconds to respond to a pressing email.

The Google team, led by Mary Grove, is an awe-inspiring yet approachable group of innovators committed to using their powers for good. Because Google was founded in a garage nearly two decades ago, this team understands and values what it takes to start small but dream big. One of the ways they support entrepreneurs across 125 countries was by hosting us at Google’s amazing campus, where we spent the day as “Googlers.” We were paired with Google employee mentors who gave us constructive feedback on our businesses (it’s incredibly cool to talk user experience with a Google product manager!). We ate in the employee cafeteria, took a break in a nap pod, interacted with team leaders and, above all, were inspired by the “moonshots” mindset (ever heard of Google Glass or self-driving cars?) that makes Google, well, Google.

Each speaker we welcomed to the mansion was insightful and inspiring – and willing to share knowledge and feedback. I was struck by how generous these wildly successful people were with their time, and we were lucky to be on the receiving end of their wisdom. Most were OK with follow-ups, and I was fortunate to meet with a couple of them outside of regularly scheduled programming. Their insights really helped me crystalize my action plan. 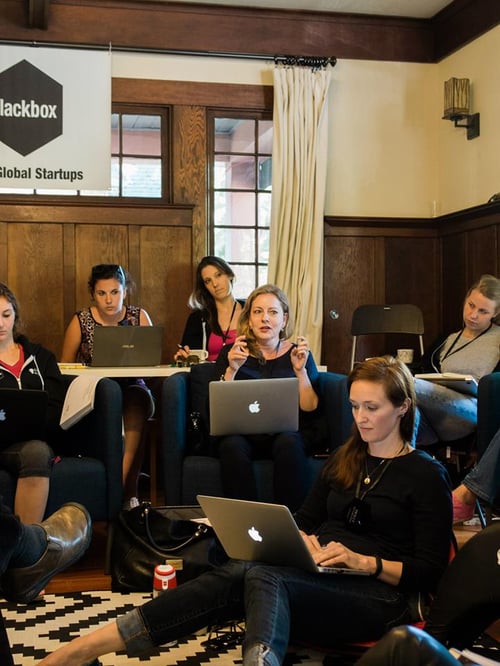 Our pitch coach, Bill Joos, was relentless in encouraging our pursuit of the perfect pitch. We refined our message until we could say it as a “handshake pitch,” “elevator pitch,” “napkin pitch” and, of course, the “initial investor pitch” that we ended up delivering at our end-of-program startup showcase dinner. It was an iterative process that resulted in clear messaging, which is key when raising capital, as I – and most of the founders – am. After a labyrinth of scribbles, notes and drafts, my handshake pitch gelled as: “Snackable content for busy people in 30 seconds or less!”

The day before our showcase, we met nonstop with a variety of experts and mentors, who all weighed in on our pitches. Having Silicon Valley leaders critiquing your two-and-a-half minute message is daunting, but every piece of advice was valuable. At the end of the day, it was up to us to filter and synthesize it all (and shrug away any doubts implanted by conflicting opinions). But by showtime, we were ready.

The culmination of those two focused weeks was a “Shark Tank” style presentation on an outdoor stage in front of hundreds of people (including venture capitalists, angel investors, executives, entrepreneurs and other movers and shakers). Each founder had less than three minutes to present, then another couple of minutes for Q&A with the sharks. After watching my fellow founders carefully craft their messages during our time together, seeing each of those impressive women deliver her pitch perfectly sent a surge of pride through me. Put simply, they nailed it. So much talent and promise; so many possibilities in one place. I wanted to personally invest in every one of them!

Decompressing around the firepit that night, we reflected that perhaps the most important part of the experience was simply unplugging from the daily grind of operating our businesses, so we could focus on the bigger picture. Sometimes you’re so busy dealing with the minutia of all that has to get done on any given day, that you miss the bigger opportunity, or all the possibilities. Those two weeks allowed each of us to focus on our mission and develop a plan to make it happen. I walked (flew) away with a clear plan for my business, one that pairs my passion with my strategic business goals. Next steps: raise more capital, hire more talent, re-launch our tech platform and build the best women-focused mobile media company in the world. Piece of cake!

I’m grateful to 1871 CEO Howard Tullman and his team for their support. As Howard said: "Our close relationship with Google continues to create amazing opportunities for 1871 companies. We are especially excited to work on a program that focuses on supporting women entrepreneurs, and we congratulate 30Second Mobile on being selected for this year’s Blackbox Connect program.”

I’m grateful to Fadi Bishara, Sanita Laivina and the Blackbox team for including me in the incredible group of founders they put together from around the world. They provided a setting in which we could take the next steps in our entrepreneurial journeys, together.

Huge thanks to Mary Grove and her team at Google for enabling startup founders like myself to grow and thrive; and to believe that our companies, too, can achieve unicorn status.

But billion-dollar valuation or not, the “shoot for the moon” mentality is what every entrepreneur should feel. Because even non-unicorns can be the best of their kind and change the world for the better in their own unique way. The possibilities truly are endless!

About the Author
Elisa All, Founder, 30Second Mobile
Award-winning entrepreneur Elisa All is an 1871 member and the founder of 30Second Mobile, a mobile media company creating snackable content for busy people in 30 seconds or less. Previously, Elisa founded iParenting, a highly-regarded dotcom acquired by the Walt Disney Company in 2007.