Last week, 1871 and the CEC held the 11th Annual Momentum Awards Dinner in celebration of Chicago's fast-growing community of innovators, pioneers, and entrepreneurs. This year's event observed the theme of an emergent tech ecosystem, which includes emerging technologies, leaders, and opportunities that embody the creative potential of change and innovation. During the ceremony, a number of awards were presented to local companies and entrepreneurs who embody the emerging and creative potential of change and innovation – in case you couldn't make it, we've got everything that you missed right here. 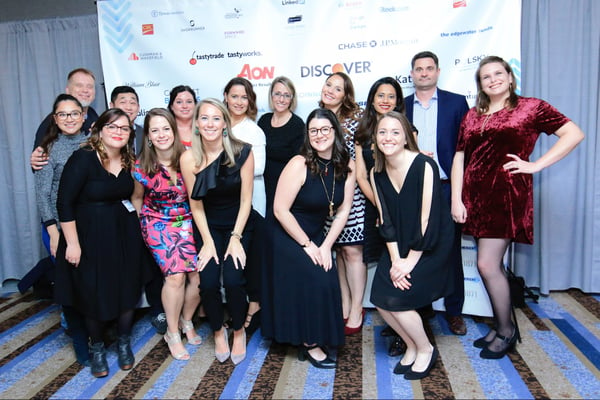 Members of the 1871 team take a photo to celebrate the 11th Annual Momentum Awards Dinner.

On November 15th, 2018, Chicago's tech and business community gathered in a packed auditorium at the Hyatt Regency Hotel for the 11th Annual Momentum Awards Dinner. As a celebration of the city's best and brightest, the event brought industry titans, entrepreneurs, and legislators together to commemorate the city's most talented startups and innovators. Over the course of the evening, five awards were presented:

In case you missed the event, we've included all of the evening's most memorable highlights -- along with the awardees -- below. 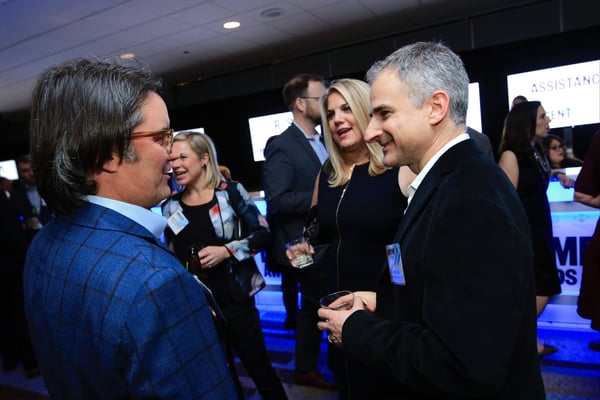 Attendees and guests network and connect just moments before the ceremonies begin. 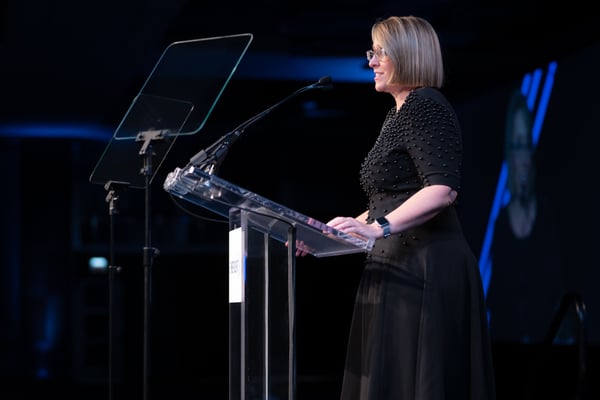 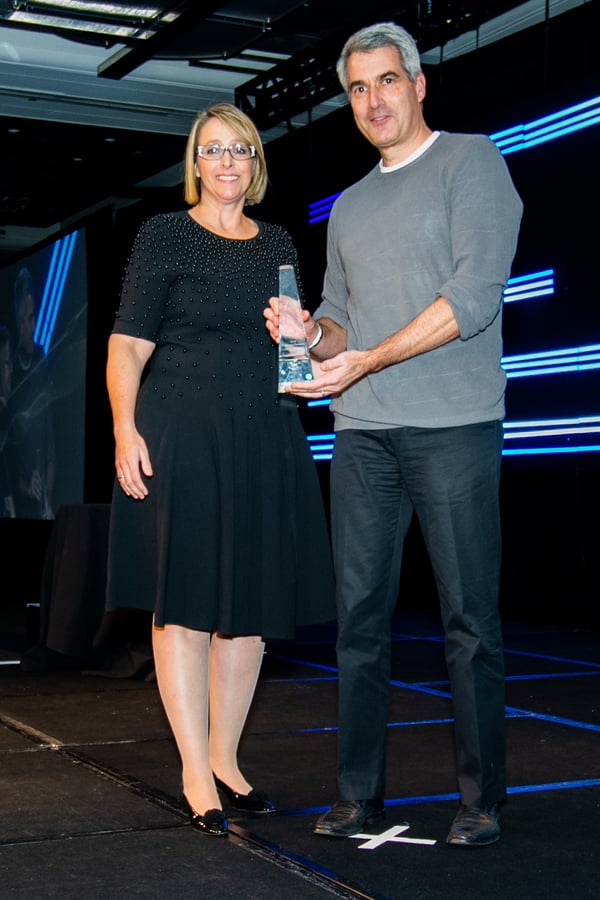 "As a direct bank and payments company, technology underpins everything we do. We have a long-standing commitment to support education in the Chicagoland area, and it is a privilege to be recognized by 1871 for our work in tapping the potential of college students pursuing a career in technology.” – Roger Hochschild, CEO, Discover

Governor-elect J.B. Pritzker spoke to event attendees and guests to share his insights on tech and entrepreneurship in the city of Chicago and the state of Illinois. 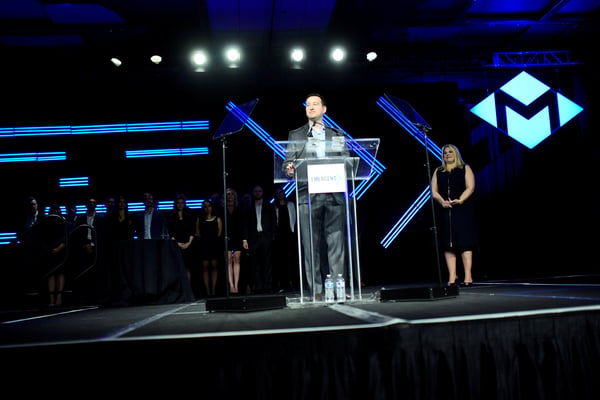 “It’s an honor to win an award that recognizes the characteristics which are fundamental to our work at Future Founders -- inclusion, grit, and passion. We are proud of what we’ve accomplished and look forward to empowering even more entrepreneurs in Chicago and across the country.” – Scott Issen, Co-Founder and CEO of Future Founders. 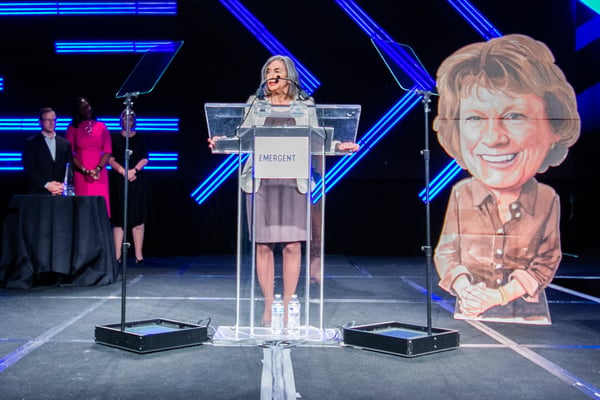 “It is an incredible honor to receive the CEC's Entrepreneurial Champion Award in recognition of the Polsky Center’s contributions over the past two decades. I’m thrilled to be recognized alongside my colleague and close friend, Linda Darragh, for the important role that our universities have played in growing the vibrant startup community here in Chicago.” – Ellen Rudnick, Sr. Advisor on Entrepreneurship and Adjunct Professor, The University of Chicago Booth School of Business.

“Building a pipeline for the next generation of Chicago entrepreneurs is the core of our work at Kellogg’s Innovation and Entrepreneurship Initiative. Over the last six years, we rebuilt our program to include expanded access to mentorship, funding and courses providing real-world innovation experience. I am proud of Kellogg’s impact in launching new founders and businesses into the local startup community. As a member of the Chicagoland Entrepreneurial Center since its inception, I am also energized by the tremendous growth of the local entrepreneurship ecosystem more broadly, including through the impressive work of my fellow award recipient Ellen Rudnick. I look forward to continually evolving the partnership between Kellogg, 1871 and the Chicago startup community.” – Linda Darragh, Executive Director of the Innovation and Entrepreneurship Initiative, Kellogg School of Management. 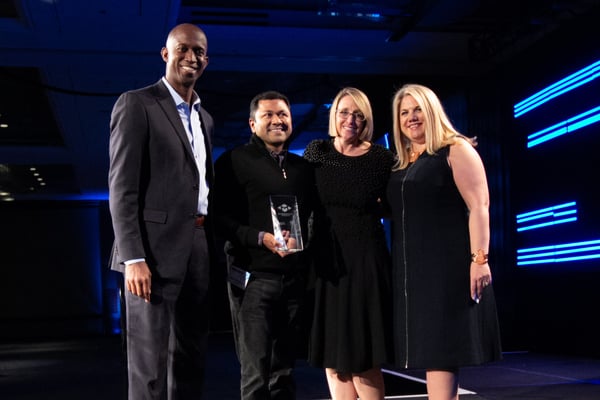 FourKites Founder and CEO Matt Elenjickal (second from the left) smiles as he receives the Momentum Rising Star Award.

“1871 provided invaluable resources to us when we were first building FourKites. Our team is honored to receive this award, and we are proud to contribute to Chicago’s vibrant and growing entrepreneurial community.” – Matt Elenjickal, Founder and CEO, FourKites 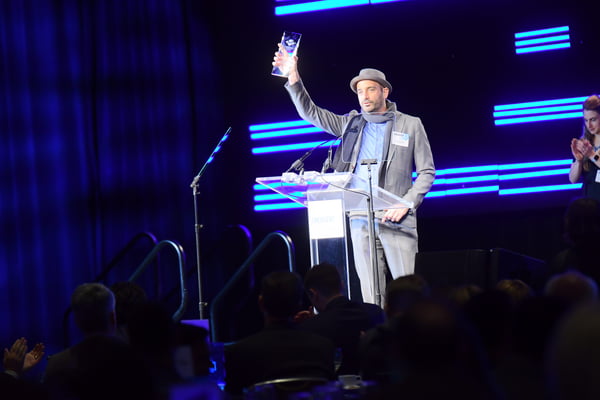 "It's an honor to win the Momentum Award, and I'm extremely proud of all the work and hustle that my team has put in this year.  I couldn't be more proud of them." – David Kalt, Founder and CEO, Reverb 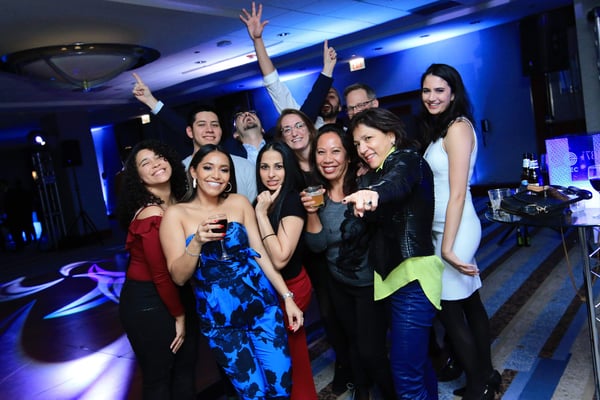 Following the awards dinner, guests attended an after-party – capping off an unforgettable evening for Chicago's tech and entrepreneur community.

A big thank you to all of those who attended or supported the 11th Annual Momentum Awards Dinner. It was an extraordinary celebration and we're both grateful and fortunate that we were able to share it with you. And for those of you who missed the event, make sure you mark your calendars for September 19, 2019 – when we'll be holding next year's Momentum Awards Dinner!

Interested in attending the next big event at 1871? Find out more by heading to our event page.