AirProxima Co-Founder Haley Hebert Has Her Eyes on the Skies

Haley Hebert and her team have spent a lot of time with boots on the ground getting AirProxima off of it. If Hebert -- a co-founder of the fifth WiSTEM cohort company -- and her team have their way, snagging a chartered flight is going to be a lot like ordering an UberPOOL. 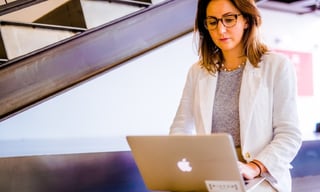 Through the machine learning and artificial intelligence solutions they are building to disrupt the private charter industry, Hebert envisions a world where a group of bachelorette party revelers or conference attendees can hop on a private, chartered flight without completely breaking the bank. “For between $500 to $1,000 a ticket you can fly on a private plane,” she said. “We’ve basically taken aircraft that were used for one purpose and changed the way they’re sold more intelligently.”

"We’ve basically taken aircraft that were used for one purpose and changed the way they’re sold more intelligently.”

While that’s the vision for AirProxima, Hebert and her co-founders have spent the last 18 months tackling a problem many founders find themselves faced with — teaching an old industry new tricks. As they develop algorithms that will predict demand for chartered flights from one place to another, her and her team of three other co-founders have also been recruiting private charter pilots — typically retired commercial pilots or Air Force veterans — to use their platform.

It’s not always the easiest task.

“We’ve noticed this is an industry that doesn’t use software for anything,” she said, adding that operators typically operate independently and mostly use pencil and paper to handle everything from payment for flights to lead generation.

Hebert said she has traveled around the country working with operators since AirProxima’s founding, getting the operators on-board, as it were. While the pilots certainly know their way around a cockpit, her team is dedicated to getting them comfortable using the platform — which essentially takes the place of a typical charter plane broker to book a private flight — and have now amassed a network of more than 100 private operators around the country.

“We wanted to make sure there wasn’t an insane learning curve before launching anything,” she said.

It’s going to take a lot of tech and a lot of data to get AirProxima airborne to the point where private charters are instantly able to be booked by consumers at the price point the company is targeting. And while that’s in the works, Hebert admits she never saw her career taking the path that it has.

Hebert spent the first eight years of her career at a boutique advertising and PR agency on the west coast, coaching large tech companies on how to use Twitter — still in its infancy — beginning in 2008. It was through that firm she met one of her co-founders, Bill Banta, who toward the end of her tenure at the company was launching CENTR Camera. She took on the launch of the 360-degree camera as a passion project, eventually helping Banta raise more than $500,000 on Kickstarter and eventually sell the device to Amazon. After that experience, she said she was hooked on the idea of entrepreneurship.

“It made me realize I was more capable than I thought,” she said. “There are so many things along the way you can learn and become just as knowledgeable as someone else in the industry. Realize you are not as far behind as you think.”

“It made me realize I was more capable than I thought. There are so many things along the way you can learn and become just as knowledgeable as someone else in the industry. Realize you are not as far behind as you think.”

She said she’s excited to be a part of the fifth WiSTEM cohort for several reasons, but especially because she’s gaining a support group she doesn’t have elsewhere.

“I love my cofounders, but oftentimes, especially being in tech and now in aviation, those worlds can kind of feel like boys clubs,” she said. “It’s an unbiased sounding board.”