If there were a looking-glass that showed Chicago’s future, it would have been on stage August 16 at 1871. Digi.City Connect -- a multi-city series of discussions with lawmakers, government officials, technologists and corporations -- made a stop in Chicago to discuss the social and economic impact of smart city technologies with several local experts. 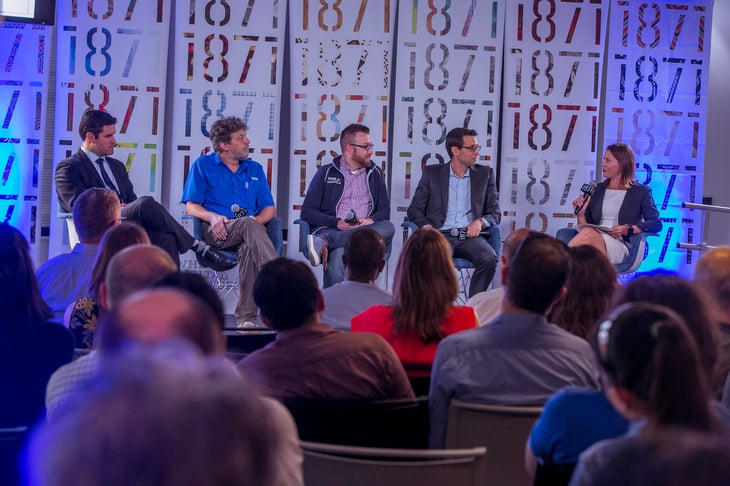 The panel was moderated by Digi.City founder Chelsea Collier, who is currently traveling the US and China to study smart city technology and implementation as part of the 2016 Zhi-Xing China Eisenhower Fellowship. Other members of the panel of experts included:


Chicago Mayor Rahm Emanuel kicked off the panel by introducing a variety of tech enabled smart solutions already in place or planned for the city, including a grid of LED street lights that will be able to be dimmed or brightened intelligently as well as an English and Spanish remote tutoring program currently being run for free out of the Chicago Public Library system. His challenge to the panel -- and any city developing smart city initiatives -- is to think of ways it can be used to encourage inclusive economic growth, or a system where technology is positively impacting the lives of all citizens.

The panel dove into a variety of examples of where Chicago is headed with the bevy of data available, as well as how it’s imperative that all city stakeholders -- government leaders, universities, scientists and community members -- work together to make the city smarter. Here are some key takeaways:

—Including your favorite restaurant, the lake and a high school near you. With the ability to measure and analyze the massive amounts of data produced by the city, some seriously interesting solutions are in place or in the works. Examples include the city revising its restaurant inspection schedules based on trends in certain areas, the city’s Clear Water project that aims to predict e.coli readings in local waterways and beaches, and sensor projects being brought to local schools for students to create their own projects and share data.


Whitaker said Chi Hack Night has been successful because of the diversity of individuals that show up to work on apps and other tech solutions on a weekly basis. Journalists, community leaders, city employees and many other constituents collaborate on problems, producing some seriously cool results like a map of Chicago buildings that don’t recycle, a system to track when sewage is in the Chicago river and a visual analysis of bike lanes in Chicago.


While Collier commended Chicago for being a leader in smart technology, several panelists made it clear that one roadblock to moving things forward is talent. Whitaker noted that cities like Chicago always need experienced, innovative talent to join their teams, and those in tech should take note if they want to make a serious civic impact with their careers.


Want more? Digi.City has a ton of resources and information about the future of smart technology in cities around the world.