This International Women’s Day at 1871 was remarkable! The impact was so strong because of the thought leaders, entrepreneurs and professionals like you in our community. It was a day dedicated to covering topics that concern everyone, from a woman’s perspective. Underscoring this year’s theme “Each for Equal,” everyone was invited to join in on panels, breakout discussions, and fireside chats ranging from product design to health and wellness. 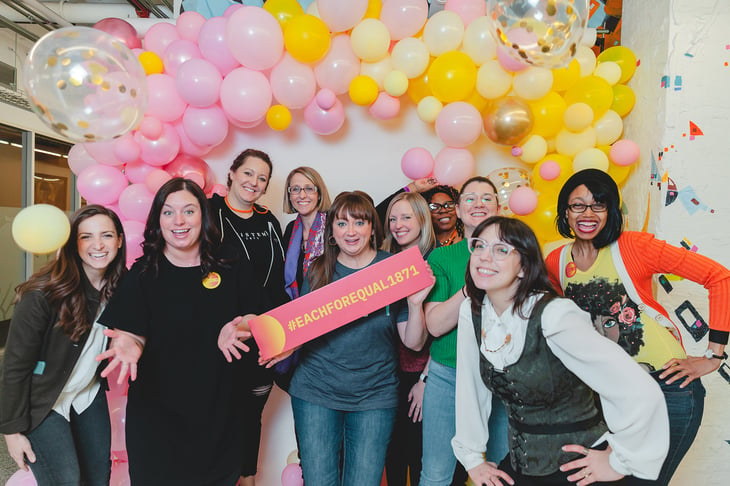 We thank all that joined and participated in the day’s events! Below, we’ll highlight some of the moments that made it special. Additionally, be sure to check out our photo gallery for the event.

1871 CEO Betsy Ziegler’s opening address included a plethora of powerful facts about the tech industry, 1871, and the city of Chicago. Here are some of the highlights:

Betsy ended her opening remarks with a call-to-action for all attendees:

She then sat down for a fireside chat with Wanji Walcott, Chief Legal Officer at Discover and Julie Loeger, President — US Cards at Discover. The two guests discussed their vastly different backgrounds: Wanji has vast experience but is new to Discover, and Julie has spent three decades working her way up through the company.

Wanji made an observation that encompassed a common thread we saw reappear throughout the day:

“I was given more chances than I deserved to be successful. If people think I can do this, then I’m going to die trying.”

The importance of being given a chance to prove yourself could not be clearer in the first workshop in our Entrepreneurship Track, Lift as You Climb. A panel of diverse women — entrepreneurs and corporates, young and mature — sat together to discuss mentors, mentees, and, most notably, sponsorship. Often thought of as mentors on steroids, sponsors actively advocate for their protégés and, in turn, benefit when their protégés succeed.

Oriana Vogel, VP of Human Resources at Discover, shared her opinions on sponsorship: “You need someone in that room putting their brand on you and staking their reputation on you.” Men are more likely to benefit from sponsorship in general, but also are more likely to have male mentors. A 2019 study by PayScale indicates those who have a sponsor earn 11.6% more on average. More interestingly, women who are sponsored by women earn 14.6% less than women who have males on their side. All of this perpetuates gender gaps in leadership and pay.

The Entrepreneurship Track continued with Scaling with Equitable Hiring Practices moderated by Sharmili Majmudar of Women Employed. Many companies see the cost of turnover (a whopping $3,000/employee) as an inevitable part of doing business, but panelist Cyndi Solitro of the Chicago Workforce Funder Alliance pointed out that retention rates can be vastly increased with a hiring process imbued with respect for the worker. She says, “Really take the worker’s voice into consideration in your entire practice. It’s really important to understand where your worker is in their life and address this in the hiring process.”

Fellow panelist Dr. Sonat Birnecker Hart, CEO of Koval Distillery agreed, saying she strives for Koval to be a model to other peers: "You have the power to change things by what you are doing in your own business" — instituting the right hiring & worker respect policies creates a sort of "peer pressure factor" for other business owners to do the same. She also advocates that women not be shy about highlighting the fact that they are indeed women: “I’d bring my baby with me while on a panel with all men, talking about alcohol in front of a huge audience of people. I’d go to sales meetings — baby attached. I encourage my employees to do that too.”

The last workshop of the Entrepreneurship Track was a panel on Femtech, the intersection of technology and female wellness. Women make up half of the population and have unique health needs which necessitate a voice at the table for female leaders. Without this, women’s concerns become ignored. 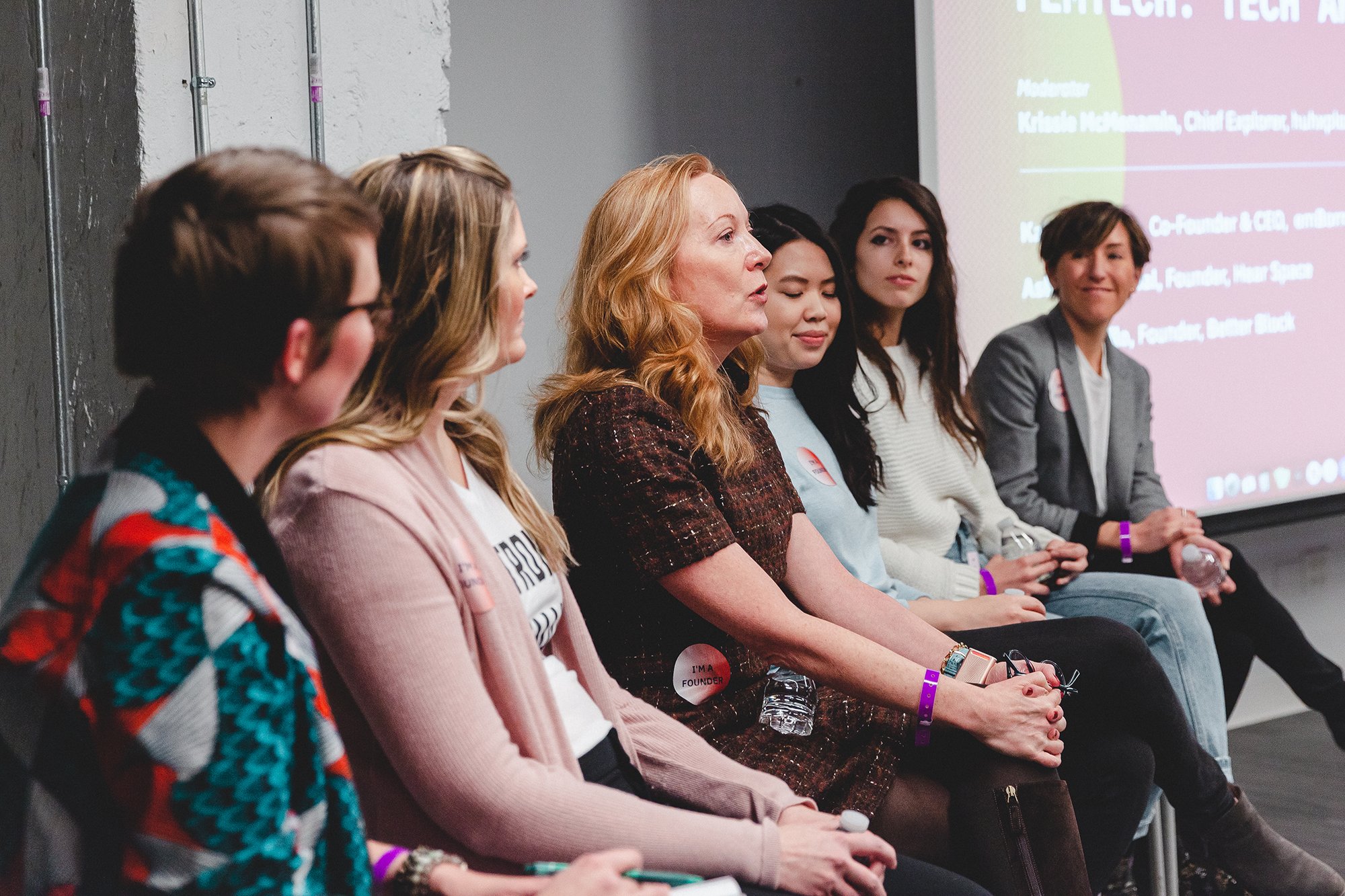 Femtech panelist Elizabeth Gazda’s company, Embr Labs, invented the Embr Wave, a wearable that allows you to control how your body feels temperature, which has the added bonus of regulating menopause-induced hot flashes much more effectively than most Hormone Replacement Therapy. She expressed frustration over the invisibility of an important sector of the population, saying, “What shocks me is when you talk to a company that could partner with us — they don’t see women over the age of 45 as relevant when those women are making most of the household financial decisions. They're spending 80¢ of every dollar at drugstores. Yet, these women are invisible when it comes to solving their health needs.”

Simultaneously, a parallel Professional Development Track was in full force. The Female Perspective in Design panel brought together seasoned female designers under moderator Martha Cotton, Managing Director at Fjord. The overarching reason for a female perspective in design? If you want everyone to use your product, it should be usable by everyone, too. Having a diverse team of designers helps eliminate unconscious biases from design decisions. Similarly to the conversation in the Femtech panel, the discrepancy is visible in the design world, as well: while only 11% of creative directors are women, 73% of purchasing decisions are made by women, $20 trillion of the world’s annual spending. 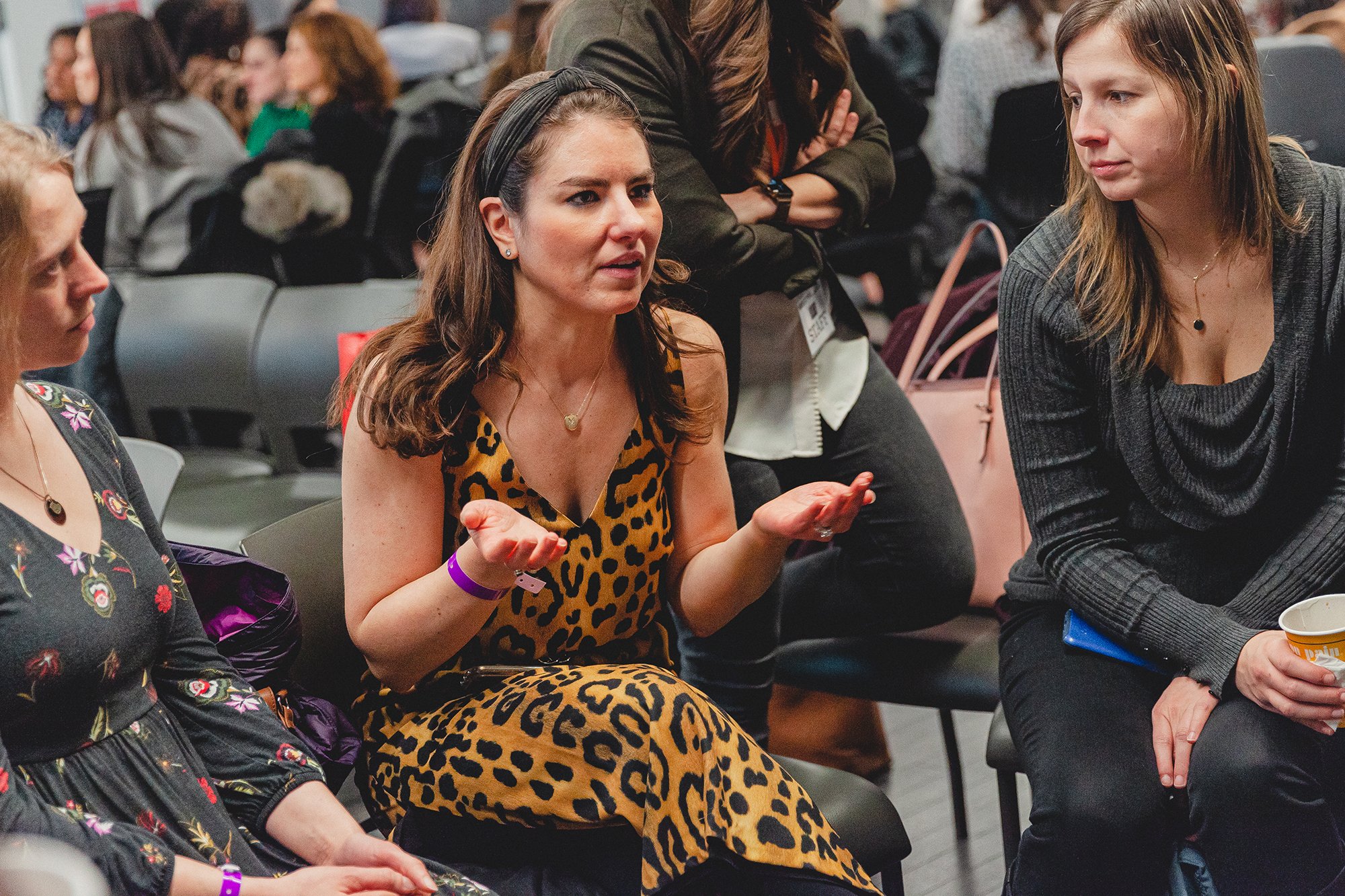 The Discover-led Female Financial Empowerment workshop highlighted how women handle the majority of financial decisions in their households, yet display lower levels of confidence in these decisions than men do. Group discussion participant Robin Wilson said, “Emotional labor and social pressure has [women] wired to different priorities and multitasking in ways that doesn’t address critical financial literacy early on.” A fellow participant shared tools made with women in mind that she uses, such as The Finance Bar, Clever Girl Finance, Broke Millennial, and Her Money Media.

We capped off our workshops with one more startling observation voiced by speaker Rumi Morales, Head of Venture at Outlier Ventures in the Women Funding Women session: despite evidence that money invested in women outperforms investments in men, 86% of investments still go to one-man or all-male founding teams. The formula for female founders’ success goes beyond having female VCs: it must include mentors, sponsors, and advisory teams.

Finally, the event everyone had been waiting for: Desiree Rogers’ keynote address. Conducted in a fireside-chat style moderated by Betsy Ziegler, the chat delighted all in attendance. As the audience ricocheted between listening raptly and laughing hysterically, Desiree walked us through her multifaceted career and her eventual decision to focus on her life’s mission. This decision led to hers and her partner Cheryl Mayberry McKissack’s acquisition of Black Opal, a masstige beauty company focused on the needs of women of color.

Desiree made sure to leave us all with some words of wisdom:

With that successful conclusion to the event, the day wound down with open networking. Attendees were left with much to mull over, lots of knowledge gained, and bonds made. 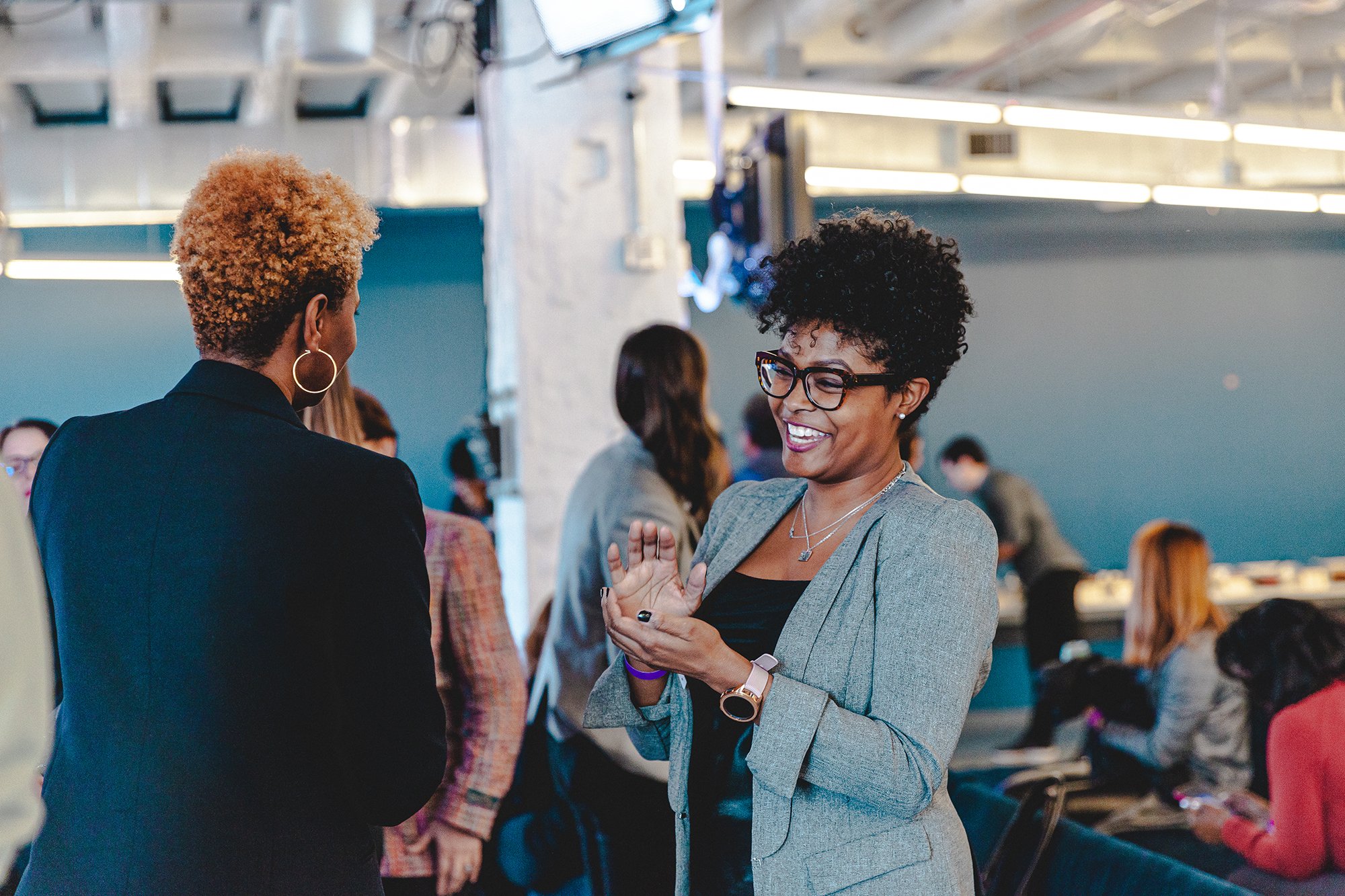 Each for Equal Month @ 1871 isn't over yet! Next Tuesday, join us for the Kauffman Policy Forum, #EachforEqual in STEM Education Policy.

This policy forum will feature a panel of education policy experts and interactive discussion on how policymakers and entrepreneurs can work together to encourage women and girls to pursue careers in STEM.